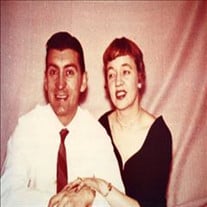 Agnes Walton became an angel in the outfield for all her family on September 27, 2021 at the age of 92. Born on June 18, 1929, in Burnbank, Hamilton, Scotland, she was the third daughter of William and Anne Connolly. She was preceded in death by her husband, Robert, her daughter Maureen, her parents and five siblings-Jeannette, Isabel, Faye, Cathy, and Thomas. She is survived by her son Robert Walton, Jr., and his wife Michelle, of Tulsa, OK and her beloved grandchildren Davis, Donovan, and Cassie, as well as her three sisters; Annie Wall of San Antonio, Tx, Mary Weir of Hamilton, Ontario, Canada, Rose McGranaghan of Bellshill, Scotland, and her brother Hugh Connolly of Cambuslang, Scotland, and numerous nieces and nephews. She will be dearly missed by all. Agnes had a full life and was especially known for her selfless devotion to family and food, her strength in the face of life's challenges, as well as her passion for baseball. She left Scotland to immigrate to New York City in the mid 1950's to work as an engineering secretary for the M.W. Kellogg Company in Manhattan. Robert, the love of her life, soon followed her from Scotland, and they were married at St. Mary's Church in Rutherford, New Jersey. After marriage, Agnes's focus centered on her family, especially her children. Her strength, determination and undying love in the face of numerous family health issues was a blessing to all. In spite of these challenges, Agnes always made sure there was time for family fun at the Jersey Shore. No family gathering would be complete without a delicious new dish, lovingly prepared and proudly presented by Agnes. Agnes's love of baseball began with the New York Yankees, and soon grew into a fulltime job as a "couch coach." She was always ready with a critique of someone's performance on the field, whether you wanted to hear it or not! Services will be held at St. Mary's Catholic Church in Rutherford, New Jersey on Wednesday, October 6, 2021 at 10:30 a.m. Burial will follow in Holy Cross Cemetery. Arrangements are with: Macagna-Diffily-Onorato Funeral Home, (201)939-0098

Agnes Walton became an angel in the outfield for all her family on September 27, 2021 at the age of 92. Born on June 18, 1929, in Burnbank, Hamilton, Scotland, she was the third daughter of William and Anne Connolly. She was preceded in death... View Obituary & Service Information

The family of Agnes Elizabeth Walton created this Life Tributes page to make it easy to share your memories.

Agnes Walton became an angel in the outfield for all her family...

Send flowers to the Walton family.