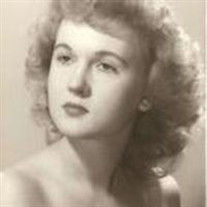 Flusche’, Anita Louise (Gray) 83 years old, Tulsa, OK, passed from this life on January 21, 2010. Louise was born December 9, 1926 and grew up in Eufaula, OK with her parents Emmit and Tula Gray and older sister Wanda. She had a small but close extended family and enjoyed many activities during her school years, including playing clarinet in the high school band. Louise was remembered as being “beautiful both inside and out”, which was characteristic of her throughout her life. After high school graduation, Louise moved to Washington D.C. to work for the war effort. She returned to Oklahoma and attended Oklahoma A&M where she met her future husband, Frank, on a blind date. They remained in Stillwater several years and started their family. Frank and Louise returned to Frank’s childhood dairy farm in Muskogee where they were blessed with more children. In the mid 1950’s they relocated to Tulsa where their family continued to grow. Louise would list her accomplishments in life as simple but important ones. She was a wife and mother. She was a 52-year member of Church of St. Mary. Louise was her children’s “cheerleader” in their many activities during their school years at St. Mary’s elementary and Bishop Kelley High School. The mileage she put on her station wagon each year would probably astound anyone. Louise taught her children through her example, faith and kind heart. Louise enjoyed literature, poetry, gardening and bird watching. She was intelligent and blessed with a quick wit. Louise especially treasured her friendships as with her “red hat buddy” Bernie. Louise was preceded in death by her parents, her sister Wanda McIntosh, infant daughter Denise Ellen, and by her beloved husband Frank in August, 2009. She is survived by her seven children: Mary Tula (Terry), Lisa, Anita, Rita, Edward, Teresa, and Frank Jr. (Allison). Also survived by her eight grandchildren: Bridgett, (Russell), Michael, (Melissa), Nicholas, Emily, Will, Mary Ellen, Ann Marie, Jessica and nieces and nephews of the McIntosh family. Rosary 7:00pm Sunday, January 24 at Fitzgerald Southwood Colonial Chapel. Funeral Mass at Church of St. Mary, 9:30am Monday, January 25. Louise will be lovingly remembered as a devoted, gentle and gracious woman. “And until we meet again may God hold you in the hollow of His hand.” Fitzgerald Southwood Colonial Chapel, 918-291-3500. www.southwoodcolonialchapel.com

Flusche&#8217;, Anita Louise (Gray) 83 years old, Tulsa, OK, passed from this life on January 21, 2010. Louise was born December 9, 1926 and grew up in Eufaula, OK with her parents Emmit and Tula Gray and older sister Wanda. She had a small... View Obituary & Service Information

The family of Anita Louise Flusche' created this Life Tributes page to make it easy to share your memories.

Send flowers to the Flusche' family.