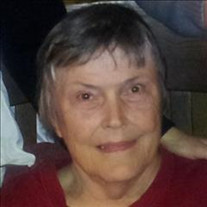 Annette Elise Devine Fitzgerald, born on July 18, 1935, in Detroit, Mich., passed away Sunday, May 22, aged 86, at her home in Tulsa, Okla. The only child of her mother Mary Devine (Uptmoor), Annette was raised in Fort Smith, Ark., surrounded by family and cousins. She attended St. Scholastica Academy in Fort Smith, Ark., Mount St. Scholastica College in Atchison, Kan., then, completed her junior year at Incarnate Word College in San Antonio, Texas. After marrying in 1955 and having seven children, she completed a degree in Education at Eastern Connecticut State University in 1972. Annette loved motherhood and raising her large family figured among the greatest joys of her life. In 1982, aged 47, Annette began to study nursing at Tulsa Junior College. Eventually, she became an oncology nurse at St. Francis Hospital in Tulsa, Okla., where she continued to care for others until her retirement in 2000. Annette was a member of Church of the Resurrection. One of her greatest gifts was her instillation of faith in God to her children, and to know He has a plan for us and that we are always in His hands. Annette was intelligent, and an avid reader, and her example inspired a lifelong pursuit and love of knowledge in her many children. She was able to give each child the gift of her time and a motivation to be independent. She loved to sing, garden, and laugh. Annette taught her children to have high hopes, just like that little old ant who thought he could move a rubber tree plant! She is survived by her children: daughter-Mary-Kaye Varni and husband Louie of East Hampton, Conn., their children: Jason Varni and wife Heather (great-grandchildren: Rowan and Liam) of Middletown, Conn., David Varni and wife Tina (great-grandchildren: Tyler and Aubrey) of East Hampton, Conn., Elisa Ottone and husband Greg (great-grandchildren: Paige and Grady) of East Hampton, Conn.; son-Christopher (Chris) Fitzgerald and wife Judy of Boulder, Colo., their children: Jill Fitzgerald and husband Jeremy Wear (great-grandchild: Beatrice Fitzgerald Wear) of Annapolis, MD, Luke Fitzgerald and wife Katie (great-grandchild: Isabelle Mary) of Broomfield, Colo.; daughter-Elizabeth (Beth) Fitzgerald of Ivoryton, Conn., her children: Meredith Wolfrom and her two daughters of Melrose, Mass., James Clark of Chapel Hill, N.C., Elizabeth (Bethy) Clark (great-grandchildren: Olivia, Conor, Reilly, and Jackson) of Deep River, Conn., Fawn Clark of East Hartford (great grandchildren: Damian (of Chapel Hill, N.C.) and Jonathan (of East Hartford); son-Patrick Fitzgerald and wife Monique of Tulsa, Okla., their children: Katherine (Kat) Knapp and husband Andy (great-grandchildren: Hutson and Nolan) of Tulsa, Okla., Alexander (Alec) Fitzgerald of Tulsa, Okla.; daughter-Helen Veenker and husband John of Sand Springs, Okla., their children: Christopher (Chris) Veenker and wife Jini of Littleton, Colo., Ethan Veenker of Tulsa, Okla.; daughter-Frances Cleveland and husband John of Littleton, Colo., Mom's favorite pony Maynard trotting over the rainbow bridge; and son-Andrew (Drew) Fitzgerald of Tulsa, Okla. Annette was loved by many, and will be dearly missed by her family and loved ones.

Annette Elise Devine Fitzgerald, born on July 18, 1935, in Detroit, Mich., passed away Sunday, May 22, aged 86, at her home in Tulsa, Okla. The only child of her mother Mary Devine (Uptmoor), Annette was raised in Fort Smith, Ark., surrounded... View Obituary & Service Information

The family of Annette D. Fitzgerald created this Life Tributes page to make it easy to share your memories.

Send flowers to the Fitzgerald family.