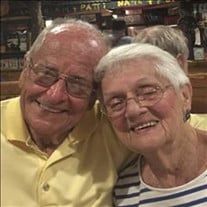 Arlene Wendelberger Pryor was born January 17, 1930 in Milwaukee, Wisconsin to Charles William Wendelberger and Eleanore Reinders Wendelberger. And with those names we're over the letter count. She died peacefully September 30, 2021 in Tulsa, Oklahoma, at age 91. She was preceded in death one year prior by her beloved husband Peter William Pryor. Arlene is survived by her two sons, Michael (of Tulsa, OK) and Thomas (of Claremore), Tom's wife Jean, and grandson Benjamin (of Tulsa), and her deeply loved extended family, along with the hundreds of people whose lives she touched. Arlene was someone who cared of others endlessly, served those around her tirelessly, and loved all unconditionally. She laughed long and hard with family and friends. She was a remarkable bowler and a great cook - ask anyone who made it to her legendary manicotti dinners. She was also crackerjack at shorthand and typing, which she used as executive assistant to the head of Grede Foundries in Milwaukee - where one day she met a dashing engineer named Pete. Kismet! Her caring nature showed in a concrete way in the many organizations where she was a stalwart volunteer and supporter: Resurrection Catholic Church (as an long time usher), Resonance Center for Women (in the formative years), St Francis Hospital in both ICU waiting rooms and the information desk (for nearly thirty years), the Charlie Allen Bowling League for those with developmental challenges (for over forty years!). She also worked at Homelife Association for many years, assisting in the efforts of individuals with intellectual disabilities to live independently in the community. She was a fierce defender of her extended family and the time she spent with them and passed this passion on to her sons. Family vacations were scheduled and filled with great joy and laughter. Lucky were those who inevitably were folded into the invited throng and became lifelong recipients of her love and attention. Arlene loved to laugh. She was an amazing bowler and a formidable bridge player and reveled in any activity that allowed her to spend time with her many friends, invariably laughing uproariously. Arlene was preceded in death by her sisters: Audrey Diel, Jean Jesse, and Joan Lavinio, and survived by her brothers Charles Wendelberger and John Wendelberger, all of the Milwaukee area. The family would like to thank the many expressions of loved sent to us since her passing. A funeral mass for Arlene and Pete will be held 10:00 am, November 13, at Church of the Resurrection Catholic Church, 4804 South Fulton Avenue, in Tulsa. Our parents were people who cared deeply about others and were involved with many non-profit organizations. In lieu of flowers, please consider a donation to an organization you love that helps others. Fitzgerald Ivy Chapel, 918-585-1151

Arlene Wendelberger Pryor was born January 17, 1930 in Milwaukee, Wisconsin to Charles William Wendelberger and Eleanore Reinders Wendelberger. And with those names we're over the letter count. She died peacefully September 30, 2021 in Tulsa,... View Obituary & Service Information

The family of Arlene Ann Pryor created this Life Tributes page to make it easy to share your memories.

Send flowers to the Pryor family.