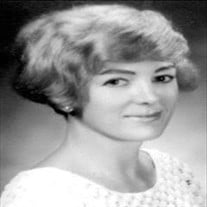 Barbara Testrow "Babs" Clancy passed into eternal rest in the early morning of August 14, 2020, at the age of 93. She was born June 4, 1927 in Liverpool, England. Barbara was witness to significant history and had stories about England before and after the Depression, living in England during World War II, and coming to America as a War Bride by boat after she met and married the love of her life, Patrick J. Clancy. She was a proud Battle of Britain survivor. Her British heroes included the RAF, Winston Churchill, and the Beatles (who put Liverpool on the map). She and Patrick lived in Springfield, Illinois, until they moved and settled in Tulsa, Oklahoma, where they raised their three boys. Barbara was a long-time parishioner at Church of the Madalene, and she and Patrick celebrated their 70th Wedding Anniversary there December 28, 2015. Barbara was a jovial soul who loved her family fiercely, and music and dancing. She was a proud "Liverpoolian" and of being from the Irish population of Britain. She worked as a photographer assistant for years at Charles and Mother Goose photography. She and Pat also ran a boat business and were involved in both the Ross Perot and the George Bush Campaigns. She was involved in the Tulsa Telasa Club that did various fundraisers for international students here in Tulsa. Barbara was preceded in death by her husband, Patrick J. Clancy and son, Patrick Michael Clancy. She is survived by her sons, Timothy Clancy (wife Marilyn) and Terrance J. Clancy (wife Deborah); grandchildren, Paul, Heather, Michele, Sean, Megan and Christine; and great grandchildren, Aidan, Chase, Tiernan, and Shay. Visitation will be at 6 PM, Tuesday, before to the Rosary at 7 PM, and Funeral Mass will be Wednesday, 10 AM, all at Church of the Madalene, in Tulsa. Fitzgerald Ivy Chapel, 918-585-1151

Barbara Testrow "Babs" Clancy passed into eternal rest in the early morning of August 14, 2020, at the age of 93. She was born June 4, 1927 in Liverpool, England. Barbara was witness to significant history and had stories about England before... View Obituary & Service Information

The family of Barbara Clancy created this Life Tributes page to make it easy to share your memories.

Barbara Testrow &quot;Babs&quot; Clancy passed into eternal rest in the...

Send flowers to the Clancy family.