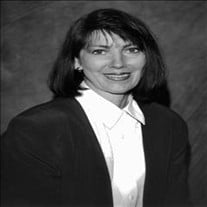 Barbara Ann (McKinney) Johnson quietly left us on Friday, September 11, 2020. She was born May 13, 1940 to Alexander Frazier McKinney III and Florine Cullen in Maud, Oklahoma. Her family nickname was Wootsie. She was the third of 7 children. She was very active as a teenager. She helped raise her younger brothers, toting them around town with her as a teenager. She was a majorette at Maud High School. She played clarinet in the school band. She also worked in her family's business, Maud Cinema. She graduated from Maud High School in 1958. She then lived with her sisters in Tulsa, OK where she attended Draughon School of Business. Following graduation, she worked at a Tulsa law firm. She married George Johnson on February 24, 1961. George and Barbara lived in Tulsa, Oklahoma where they raised their three children: Thomas B Johnson II, Robbin L (Johnson) Sipes and Patrick W Johnson. Barbara was a stay at home mother until the children were in school. In the 1980's, she pursed higher education through Langston and NSU juggling a family and her coursework. Upon completion of her studies she received a Bachelor of Finance. Barbara then became an insurance agent and co-owner of an insurance agency located in South Tulsa. She was an avid home decorator constantly perfecting her ideal home. Every spring she enjoyed planning out the yard landscape, always bright with pansies and hydrangeas. She was very creative and enjoyed painting on canvas. In retirement she enjoyed having play days with her granddaughters, lunches with Patrick and her daily cross word puzzle with a cup of fancy coffee from Starbucks. Her granddaughters, Alexandria and Ellery call her "Nana" and she stopped at no length to create memorable Easter egg hunts, extravagant Christmas decorating, elegant Thanksgiving meals and lavish birthday parties that they will never forget. She also doted on her three small dogs Meisha, Sasha and Lucy often taking them with her on short car rides. Barbara had a great sense of humor and was quick with comebacks. She was quick to discuss politics and current events. She valued her friendships and was gracious to all. She frequently donated to the Center for the Blind and The Little Light House. When she moved into The Linden Memory Care Center, she met a new friend, Sharon. Barbara and Sharon were inseparable. They took strolls, participated in actives, enjoyed meals together and said they had been friends since high school. Visits to Barbara also meant visits to see Sharon. At The Linden Barbara became known as "Queen of Trivia." Staff would ask if she had been an avid game show fan. She was preceded in death by her husband George Johnson, her parents Alec and Florine McKinney, and her sister Darla S. Pendleton. She is survived by her sisters Wanda (Jerry) Bullard, Emma (Bill) Miller, Patricia Renfro; and brothers Chris (Sheryl) McKinney and Mike McKinney; her children Thomas (Cindy) Johnson, Robbin Sipes and Patrick Johnson; two granddaughters Alexandria (Mason) Miller and Ellery Johnson; and numerous nieces and nephews.

Barbara Ann (McKinney) Johnson quietly left us on Friday, September 11, 2020. She was born May 13, 1940 to Alexander Frazier McKinney III and Florine Cullen in Maud, Oklahoma. Her family nickname was Wootsie. She was the third of 7 children.... View Obituary & Service Information

The family of Barbara Ann Johnson created this Life Tributes page to make it easy to share your memories.

Send flowers to the Johnson family.