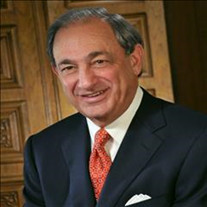 Long-time community leader and businessman Barry Milton Davis passed away on July 25, 2020 joining his wife of 55 years, Karen Davis, who passed on July 15. A Tulsa native, Barry was the oldest son of Elliott and Hannah Davis and spent formative years working at his family's downtown Tulsa sporting goods store. After graduating from the University of Oklahoma, Barry honored his father's legacy of service during WWII and joined the U.S. Army, serving proudly as an Artillery officer. Over the course his subsequent 50 plus year business career, Barry was at the forefront of the national and regional venture capital industry. As Managing Partner of Davis Tuttle Venture Partners and Davis Venture Partners, Barry invested in and helped nurture a diverse range of innovative companies and entrepreneurs with consistently spectacular results. Barry additionally served as Managing Partner of New Era Group, an energy and natural resources group; and as President and CEO of the Alliance Business Investment Company. A champion for his industry and passionate believer in the transformative power of entrepreneurship, Barry served as National Chairman of the Board of Governors of NASBIC, a national venture capital industry trade association, and was the recipient of the industry's "Lifetime Achievement Award." He was a Board member of the National Venture Capital Association; a Founder and Chairman of the Venture Capital Institute; Chairman of the Oklahoma Innovation Institute; and Board member of the University of Oklahoma Price College of Business, from which he received the "Distinguished Alumni Award." Barry was also a tireless advocate for his beloved hometown, working for decades to advance Tulsa's quality of life. His most notable civic leadership roles included serving as Trustee of the University of Tulsa; Chairman of the Board of Hillcrest Healthcare System; Board member of the Tulsa Community Foundation; Chairman of the Morningside Foundation; President of Temple Israel; and Chairman of the Zarrow Pointe Retirement Center. Above all, Barry was a devoted husband and loving father, grandfather, brother, uncle and cousin who cherished the bonds of family. Endlessly curious and caring, he inspired his children, grandchildren, nieces and nephews to pursue passions and reach for the greatest heights. He was enlivened by promise, celebrated victories with gusto, and responded to setbacks with positivity and problem solving. To his beloved brothers and cousins, Barry was a steady and reliable friend and counselor whose presence will be dearly missed. Barry is survived by three loving daughters, two sons, five grandchildren, a beloved Aunt, three brothers, three sisters-in-law, and a large extended family. Megan, Missy and Paige wish to express their gratitude for the love and care expressed by so many in the Tulsa community, and in particular for the ever-present support of the entire extended Davis, Zarrow, Richards, Harwood, and Herman families. A virtual memorial service will be held on Wednesday, July 29 at noon via Temple Israel. Advance registration is required which can be accessed at Memorial donations in loving memory of Barry may go to Zarrow Pointe Retirement Center General Fund (www.zarrowpointe.org/donate ) or Temple Israel (www.templetulsa.com )

Long-time community leader and businessman Barry Milton Davis passed away on July 25, 2020 joining his wife of 55 years, Karen Davis, who passed on July 15. A Tulsa native, Barry was the oldest son of Elliott and Hannah Davis and spent formative... View Obituary & Service Information

The family of Barry Milton Davis created this Life Tributes page to make it easy to share your memories.

Send flowers to the Davis family.