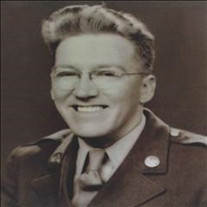 Benton Harold Askins was born on June 5, 1919 in Clarksville, Arkansas to Buck Henry and Ollie Bean Askins. He joined the National Guard in 1936 at age 17 while still in high school and was activated to the White River in Forrest City, Arkansas due to flooding on the Mississippi River. After graduating from high in 1938, he attended business college in Fort Smith, Arkansas after which he went to work at the Equitable Powder Mfg. Co. He joined the army in 1942 and was sent to Camp Crowder, a Signal Corp training camp in Neosho, Missouri. A car wreck as he was driving back to camp while on leave took him to Rogers, Arkansas where he met his future wife, Dorothy Scholze. After corresponding with Dorothy while he was serving overseas in New Guinea as a communications specialist, they were married in Rogers in 1946. They moved to Tulsa the same year where he worked for Gates Hardware and Supply becoming Vice President in charge of sales before his retirement in January of 1987. After moving to Glenpool in December of 1986, he volunteered at the Glenpool Chamber of Commerce and the Glenpool nursing home. Harold and Dorothy were active in the Methodist church both in Tulsa and after moving to Glenpool, in Jenks. They both enjoyed traveling and had visited most of Oklahoma's state parks. After Dorothy's death in 1991, he continued attending the Seniors Group in Jenks where he met Goldie Ferguson. They were married in August of 1996. Goldie passed away in February of 2016. Benton Harold Askins was preceded in death by his parents, his wife Dorothy, his brother and sister-in-law Frances and Lillian Askins. He is survived by his children Diana Askins, Donna and Randy Smith, Christa Askins, and David Askins. He has two grandsons, Christopher and his wife Kathleen Kastner and their children Alyssa and Cameron; and Johnathan and his wife Gillian Kastner. He also has two step-grandsons, Jason and Amy Smith and their children Jace, Avery, and Callie; and Brian and Sarah Smith and their son Archie. Harold's nephew Arthur Lee Askins. He is also survived by his stepchildren from his marriage to Goldie, Marla Gail Smith, and Dale Ferguson and his wife Barbara and their extended families. In lieu of flowers, please consider giving to the Community Food Bank of Eastern Oklahoma or the Oklahoma United Methodist Circle of Care. Viewing will be at Fitzgerald Ivy Chapel on Thursday, March 25th, from 10:00 a.m. until 2:00 p.m. Private family services. Fitzgerald Ivy Chapel, 918-585-1151

Benton Harold Askins was born on June 5, 1919 in Clarksville, Arkansas to Buck Henry and Ollie Bean Askins. He joined the National Guard in 1936 at age 17 while still in high school and was activated to the White River in Forrest City, Arkansas... View Obituary & Service Information

The family of Benton Harold Askins created this Life Tributes page to make it easy to share your memories.

Send flowers to the Askins family.