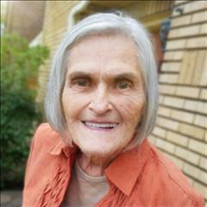 On June 16th, heaven welcomed who is sure to be the spunkiest Angel into its door. Beverly Ann Beam (Reinkemeyer) was born September 27th 1930 to Clem and Lillian Reinkemeyer. Her wit was evident at a very young age after being interviewed by the newspaper for leaving a pie for Santa Claus. When asked if Santa liked the pie she �pertly responded', "Well, He ate it." She spent her childhood with her brothers Clem Jr. and Wayne. Beverly attended college at Mt. St. Scholastica University in Kansas where she was an avid member of the Catholic Youth Organization. It was at an event held by the organization where Beverly met Tom Beam whom she would later marry. Tom Beam became a musician later in life and penned My Little Jewel dedicated to Beverly which became extremely popular with European fans of Rockabilly. She and Tom had three children Francie, Tom Jr, and Wayne. Beverly worked as a bookkeeper and property rental manager until retirement, after which, she was a volunteer for Catholic Charities and Meals on Wheels. Beverly dedicated herself to the Catholic Church and its teachings and felt especially blessed after she began receiving the miracle of the Gift of Tears every Sunday during Mass. She regularly taught catechism classes and was a long-time member of the Women's Club. Her devotion was evident not only in her words, but in her actions of spreading God's mercy and kindness Beverly will be remembered for her sharp wit, love of Pepsi in a can, and most notably her generosity. Beverly welcomed many individuals into her care including students studying from abroad, family members, those who needed haven, and any and every dog she could wrangle into the car. She provided countless memories and experiences to her grandchildren, great grandchildren, and pseudo grandchildren including Performance Art Events such as ballets, easter manicures, and teaching them how to "crack their nose". In return, Beverly only wished for others to live a happy life. Beverly was preceded in death by her father, mother, and brother Wayne, infant Wayne, husband Tom, and 5 regal Golden Retrievers, as well as numerous other dogs she took into her care. She is survived by her brother Clem Jr, daughter Francie, son Tom Jr., nieces Celica and CeCe, and several other nieces and nephews, grandchildren (oldest to youngest) David, Kristina, Devin, Hillary, Rose, and Daniel, as well as great grandchildren (oldest to youngest) River, Emma, Jude, Gavin, Hannah, and Liam. She is also survived by many spouses, significant others, and special friend of her relatives, family friends, church members, impromptu friends she's made along the way, and anyone who was blessed to know her throughout her long happy life. A rosary will be held on Tuesday, June 21st, at 10:00 am, with Service to follow at St. Francis Xavier (Our Mother of Guadalupe). In lieu of sending flowers, please consider giving the gift of your time or donation to Porta Caeli House in Tulsa, OK who helped ensure her peaceful journey to the lord. Fitzgerald Ivy Chapel, 918-585-1151

On June 16th, heaven welcomed who is sure to be the spunkiest Angel into its door. Beverly Ann Beam (Reinkemeyer) was born September 27th 1930 to Clem and Lillian Reinkemeyer. Her wit was evident at a very young age after being interviewed by... View Obituary & Service Information

The family of Beverly Ann Beam created this Life Tributes page to make it easy to share your memories.

On June 16th, heaven welcomed who is sure to be the spunkiest...

Send flowers to the Beam family.