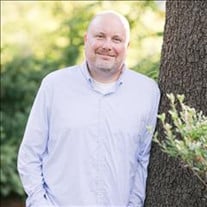 Bradley Allen Scheidt was born October 11, 1971 in Aurora, Missouri to David and Mary (Bestgen) Scheidt and departed this life for the next on August 25, 2021 in Tulsa. Brad graduated from Sapulpa High School in 1989 and from Oklahoma State University in 1993 with two bachelor degrees; Political Science and Economics. While at OSU Brad was a member of Pi Kappa Phi fraternity. Brad returned to OSU-Tulsa where he graduated with his Masters of Business Administration in 2000 graduating with academic honors as a member of Phi Beta Kappa. Brad's nearly thirty-year career was spent primarily in executive-level roles in banking and financial services, with the last 12 years at Oklahoma Central Credit Union where he served as Executive Vice President Chief Financial and Strategy Officer. On June 19, 2020, Brad married the love of his life Elena Stemple. He was a devoted and loving father to their daughter Mila, of whom he was so proud. As the eldest of the four children, Brad was a loving and protective brother to his two younger sisters and brother. He was also the godfather to his nephew Alexander Schultz, niece Sara Hefley, and cousins Kaylynn Granger and Laura Distler. Outside of his family Brad had two passions; his beloved Oklahoma State Cowboys and Manchester City Football with "Man City" blue as his unquestionably favorite all-time color Brad is survived by wife Elena and daughter Mila of Tulsa; parents David and Mary Scheidt of Sapulpa; grandmother Dolores Bestgen of California, Missouri; sister Amy Hefley and husband Heath of Tulsa; sister Julie Schultz and husband Bruce of Tulsa; nieces Abigail Schultz and Sara Hefley and nephews Alexander Schultz and Cole Hefley; and numerous aunts, uncles, cousins and friends. Brad was preceded in death by his grandparents Raymond Scheidt, Pauline Scheidt, Edward Bestgen and younger brother Matthew Scheidt. A rosary will be held Sunday, 7 PM at Saint Anne's Catholic Church. A funeral Mass of the Resurrection and Celebration of Life will be held 10 AM, Monday at St. Anne's Catholic Church in Broken Arrow with the Rev. Fr. Matt Gerlach as celebrant. An internment at Calvary cemetery will follow. The family appreciates all the prayers, thoughts, and messages of concern these past few weeks as it reminds them of just how loved and special Brad is to so many. Brad was a "rock" within his family and circle of friends who will always be greatly loved and greatly missed . May he rest in peace. In lieu of flowers the family is requesting donations be made in Brad's memory to the Matthew Allen Scheidt Memorial Scholarship fund with the Oklahoma State University Endowment. To donate, please contact the OSU Foundation at (800)-622-4678 or (405) 385-5100 and indicate you'd like for the donation to go to the Matthew Allen Scheidt Memorial Scholarship in memory of Brad Scheidt.

Bradley Allen Scheidt was born October 11, 1971 in Aurora, Missouri to David and Mary (Bestgen) Scheidt and departed this life for the next on August 25, 2021 in Tulsa. Brad graduated from Sapulpa High School in 1989 and from Oklahoma State... View Obituary & Service Information

The family of Brad A. Scheidt created this Life Tributes page to make it easy to share your memories.

Send flowers to the Scheidt family.