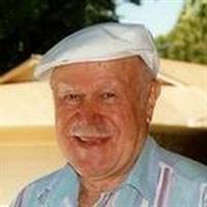 Carl Doshay, 92, died Friday afternoon after a short illness, surrounded by his loving wife Lori and other close family and friends. Carl was born May 1917 in the Lower Eastside of NYC of parents who had migrated to America from Poland and Russia and were processed at Ellis Island. His formative years up to WWII were spent in NYC. During the War he served in the US Army Air Corps. Upon discharge he relocated in Southern California where he was successful in both the music production business as well as various real-estate ventures. In 1975, seeking new business opportunities he moved to Tulsa where he met and married the love of his life Lori, to whom he had been married 33 years at the time of his death. Carl Doshay is survived by his wife Lori, and four children of his first marriage: daughters Enid Rom of Palm Desert, California; Sherry Coluka of Las Vegas, Nevada; Pam Angel and her husband Dennis of Tarazan, California; and one son, Michael and his wife Mary of El Cajon, California. He is also survived by Lori Doshay's three daughters: Cheryl Mallon of Tulsa; Debbie Pirdy and husband Jim of Newport Beach, California; Pam Kiser and husband Ken of Tulsa. Carl was also dearly loved by a host of grandchildren and great-grand children: Grandchildren include, Corey Angel and wife Lisa and their two daughters of Los Angeles, California; Brian Angel and wife Heather and their three children of Tarazana, California: Jody Angel his wife Coco and their three children of Scottsdale, Arizona; Jamie Angel, husband Chris and their daughter of Tarazana, California; Jessie Doshay of Denver, Colorado; David Doshay and daughter of El Cajon, California; Josh Doshay also of El Cajon, California; Sam Peevy, wife Stephanie and daughter of Tulsa; Russell Peevy and wife Heather and three children of Tulsa; and Travis and Spencer Pirdy of Newport Beach, California. Services: 2 PM Tuesday April 6th, at Temple Israel in Tulsa with interment at Rose Hill Cemetery. The family request that in lieu of flowers gifts be made to Clarehouse, Hospice Home in Tulsa. Fitzgerald Southwood Colonial Chapel, 918-291-3500. www.southwoodcolonialchapel.com

Carl Doshay, 92, died Friday afternoon after a short illness, surrounded by his loving wife Lori and other close family and friends. Carl was born May 1917 in the Lower Eastside of NYC of parents who had migrated to America from Poland and Russia... View Obituary & Service Information

The family of Carl Doshay created this Life Tributes page to make it easy to share your memories.

Send flowers to the Doshay family.