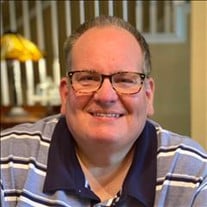 They say it is not the dates on either side but the dash that matters. The length of Carl's dash is far too short, spanning only 54 years, but it is deep and filled with the love of family and friends. Carl Edward McEntire was born on July 6, 1967, in Stillwater, Oklahoma, the firstborn of Bertie Sue Morris McEntire and Calvin Carl McEntire. On August 24, 2021, in Houston, Texas, Carl left this life after a two-year battle with cancer. Wendy, his beloved and devoted wife of 21 years, and brother, Paul, were by his side. Carl was an enthusiast. He was enthusiastic about knowing about things and going deep into a new hobby. He was known for carrying on an informed, engaging conversation in just about any subject. His interests were varied and boundless, making his range of reference equally formidable. He loved to play Trivial Pursuit but eventually, we all got tired of losing. He was unbeatable. Ever-ready with a movie quote, able to name an artist and album from just about any genre of music, Carl was the go-to reference for all things entertainment. And his interest in music didn't stop there. Carl was very proud of his collection of instruments. Collections were the natural outcome of his passion for learning. Grills, fish tanks, jewelry making, sewing, coffee making equipment, fine pipes, cooking gadgets, fishing gear . . . to name just a few. Mechanically minded, Carl and his dad operated a farm and equipment sales business for a few years, repairing and reselling trailers, tractors, and heavy equipment. But, that mechanical mindedness focused on the smaller scale too. His RC racer was tough to beat. However, it was the full-size auto that brought him absolute joy. He had a natural driving ability and loved being behind the wheel. He often traded cars and trucks but found his perfect match in the Jeep. Carl loved accessorizing his Jeeps, and his instinctive driving skill served him well on the trail. But, more than these, he loved the community he and Wendy found among Jeepers. The friendships he made through Jeepers Anonymous, Crawl4Christ, and Red Dirt Jeeps were among the most important in his life. Above all, friendships were the fiber of his being. It is Carl's big-hearted smile and welcoming spirit that we remember best and miss most. Beloved by his co-workers and a vibrant, vital part of his social circles, Carl leaves an indelible mark. Carl grew up in Stillwater and attended First Baptist Church with his family, where he made his profession of faith in Christ on March 28, 1976. Educated by Stillwater public schools, Carl graduated from Stillwater High in 1984. Next, he attended OSU and the University of Central Oklahoma (UCO), graduating from UCO with a Bachelor of Science. After graduation, Carl found a career that meshed his mechanical know-how with his gregarious personality, working in inside sales for many years. During his time at a hydraulic parts company, Carl earned certification from the International Fluid Power Society. Then, hoping to help make a difference, Carl changed careers to serve the state of Oklahoma for ten years as a DHS Child Support Specialist. But, it was three years ago that he found his perfect niche at Webco Industries as an Inside Salesman for Precision Mechanical Tubing Products. Carl truly loved his work, the company, and his colleagues at Webco. Carl's final trip home was in a gleaming 1946 Cessna 120. A fitting tribute provided and piloted by his brother-in-law, David. All his life, Carl loved airplanes and flying. You could say it was in his blood, three of his uncles were pilots and, as a kid, he rode along with them any chance he had. We had hoped for a marathon but were left with a dash. However, we are grateful for all that the dash represents and the sweet memories it holds. Carl is preceded in death by his father, Calvin; step-father, Tony Sumpter; mother-in-law, Susan Stanley; and father-in-law, Robert (Bob) Stanley. He is survived by his wife, Wendy; mother, Sue Sumpter; brother, Paul McEntire and his wife, Jenette, and their daughter, Sanda, all of Tulsa; and sister-in-law Julee Freeland and her husband, David, of Leawood, Kansas; and his much loved pups, Cisco and Raven. A Celebration of Life will be held at 11:00 a.m., on Saturday, September 4, 2021 at Fitzgerald Southwood Colonial Chapel, the family also would like to extend an invitation to a reception following the service. In lieu of flowers, please make a donation to Saving Whiskers and Tails rescue (SWAT) at www.savingwhiskersandtails.org or 918-605-6516. Carl's beloved dog, Raven, was adopted from SWAT.

They say it is not the dates on either side but the dash that matters. The length of Carl's dash is far too short, spanning only 54 years, but it is deep and filled with the love of family and friends. Carl Edward McEntire was born on July... View Obituary & Service Information

The family of Carl McEntire created this Life Tributes page to make it easy to share your memories.

They say it is not the dates on either side but the dash that...

Send flowers to the McEntire family.