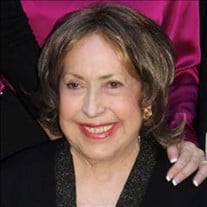 Cecilia Perea de Lugo unexpectedly went to be with Jesus on January 16, 2022. Cecilia was born in Bogotá, Colombia, on August 17, 1939 to Jorge Perea Sanclemente and Cecilia Borda Roldan. Being the youngest of six, she was afforded more independence than her five older brothers. She would often take the bus across town in this large capital city to see her beloved grandmother. She attended Catholic Schools, but life wasn't always easy, having lost her two brothers closest in age, and her father before the age of sixteen. These experiences at a young age prepared her for what was to come, marrying Gustavo Lugo, a doctor, and making a life-changing move to the USA, where her three oldest were born. Due to her husband's medical training, they were to move many times, including a stint back to Bogotá, Colombia, where her two youngest were born, before making the permanent move to the USA in 1968, and eventually settling in Tulsa, Oklahoma, where she spent the last 52 years of her life. In that period of time, she proudly became an American Citizen in 2008. Cecilia developed a reputation of being an excellent scratch cook. She loved entertaining other Latin American Doctors and their wives, who became her life-long friends. Before health issues made it difficult, she attended The Church of the Resurrection. She was actively involved in the PanAmerican Round Table, The International Club, The Opera Guild, and the Tulsa Ski Club. She loved The Arts, card games, dancing, traveling through South America and Europe, and making frequent trips back to her beloved homeland. Her home was open to close friends and family; some for days, some for years. But what she loved most in her life were her five children and ten grandchildren. Her greatest joy was being surrounded by them, and that's the way she left this earth. She was preceded in death by her parents, Jorge & Cecilia Perea, her brothers, Jorge, Alfredo, Alvaro, Jamie, Gonzalo, and her husband, Dr. Gustavo A. Lugo. Cecilia will be remembered by her five children, their spouses and her ten grandchildren. Gustavo A. Lugo, Jr., M.D., (Mary Anne Fuchs, M.D.), Alberto Lugo (Danielle), Fernanda Fisher (Bill), Claudia Sweeney, and Maria Pfeifer (Patrick) her grandchildren, Andrew and Elena Lugo, Jacqueline and Natalie Lugo, Sophia and Cecilia Fisher, Brandon and Alexandra Sweeney, and Isabella and Nick Pfeifer. In lieu of flowers, memorial contributions can be made to St. Jude Children's Research Hospital, 501 St. Jude Place, Memphis, Tennessee, 38105. https://www.stjude.org/

Cecilia Perea de Lugo unexpectedly went to be with Jesus on January 16, 2022. Cecilia was born in Bogot&aacute;, Colombia, on August 17, 1939 to Jorge Perea Sanclemente and Cecilia Borda Roldan. Being the youngest of six, she was afforded more... View Obituary & Service Information

The family of Cecilia Lugo created this Life Tributes page to make it easy to share your memories.

Cecilia Perea de Lugo unexpectedly went to be with Jesus on January...

Send flowers to the Lugo family.