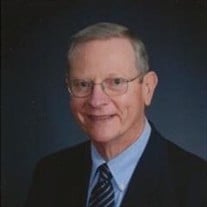 Charles Mack Evans was born June 23, 1940 in Sparks, Lincoln County, Oklahoma and passed away December 11, 2021 in Tulsa, Oklahoma after a long illness. He was the only child of Mack Herman Evans and Evelyn Isavei Rikard Evans. A graduate of Coyle High School, Charles attended The University of Oklahoma where he met his cherished wife, Celia Rose Irwin Evans. Each was President of his/her fraternity/sorority: Lambda Chi Alpha and Chi Omega. He was also elected President of the Lambda Chi Alpha chapter. Following the extensive list of academic and service activities, he graduated with honors and a major in Government and History. He was awarded a fellowship sponsored by the Southern Regional Education Board to earn a master's degree through The Universities of Oklahoma, Tennessee, and Kentucky. He returned to OU to complete a Ph.D. in political philosophy in preparation for an academic career. He accepted a position with The State University of New York and earned the position of Associate Provost for Undergraduate Education. In subsequent career moves, he earned professional rank and served as Vice President for Academic Affairs at SUNY Plattsburgh, Dean of Arts and Science at The University of Evansville, Associate Vice President and professor at The University of Illinois Urbana-Champaign. He also served as Executive Vice President of The University Center at Tulsa. Charles and Celia, who had pursued her own academic career as Assistant Professor of Special Education, chose to retire in Tulsa. They concluded their teaching and administrative careers in Illinois, spending the last twelve years in Champaign-Urbana. In Tulsa, Charles and Celia were active members of Trinity Episcopal Church, volunteering at Irongate soup kitchen. Charles was a lifelong member of ACLU and served as President of the Board of Planned Parenthood of Eastern Oklahoma and Arkansas. He was also active in the Arts and Humanities Council. Charles and Celia were married for 58 years and were deeply devoted to each other and their family. They were parents of three daughters and had four grandchildren: Anne Elizabeth Evans Locarro (Kevin), parents of Nicholas Charles Locarro (deceased) and Lucas Benjamin Locarro; Charlotte Emily Evans (deceased); Sarah Catherine Evans Clinkscales (Damon), parents of Maia Rose Clinkscales and Evan Grant Clinkscales. Service will take place on Sunday, December 19 at 4:00 p.m. at Trinity Episcopal Church (501 S Cincinnati Ave, Tulsa, OK 74103). Interment will be immediately following in the Garden Columbarium at Trinity, reception will follow.

Charles Mack Evans was born June 23, 1940 in Sparks, Lincoln County, Oklahoma and passed away December 11, 2021 in Tulsa, Oklahoma after a long illness. He was the only child of Mack Herman Evans and Evelyn Isavei Rikard Evans. A graduate of... View Obituary & Service Information

The family of Charles Evans created this Life Tributes page to make it easy to share your memories.

Send flowers to the Evans family.