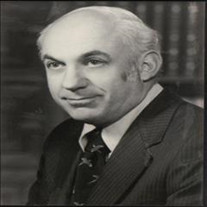 Charles Stanley Kopp was born in Oklahoma City on April 7, 1930 to parents Bella and Leo Kopp. He graduated from Central High School, and worked in his family's grocery/hardware/feed store that was across the street from the original OKC fairgrounds... View Obituary & Service Information

The family of Charles Stanley Kopp created this Life Tributes page to make it easy to share your memories.

Send flowers to the Kopp family.