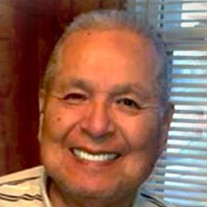 Charles William Shawnee January 22, 1938 � February 5, 2021 Charles William Shawnee, 83 of Tulsa went home on February 5, 2021 surrounded by his family. Charles was born on January 22, 1938 in Claremore, Oklahoma to William and Mary (Shapp) Shawnee. He graduated from Central High School in Tulsa, Ok. He completed the Apprentice program at Chilocco Indian School (Chilocco, Ok) and then served 4 years (1958-1962) in the U.S. Air Force. He was known as a hardworking man, he retired from T-Town Bumper in 2004. In his early years he took his family on vacations across the U.S. In his later years he would take his children/grandchildren camping at the powwows during the summer. Charles enjoyed listening to powwow and stomp dance music, hunting, fishing, and reading his daily paper. Charles accepted Christ on May 19, 2018, and in his last days enjoyed listening to gospel music. Charles was survived by his wife Doris Ann Shawnee for 64 years of Tulsa, Oklahoma; daughter Donna Shawnee-Gibson, sons Anthony Shawnee (Gina), and Billy Shawnee (Tierney); 18 grandchildren, 36 great-grandchildren, and 1 great-great grandchild. He is preceded in death by his parents, brother Jerome Shawnee Sr., sisters Mary Jennings, Christine (Boots) Pettit, Pauline Shawnee, Billie Atkins, Ona Mae Harjo, his daughter Linda Shawnee, and numerous nieces and nephews. Funeral Service will be 9:30 a.m., on Monday, February 8, 2021, at the Quapaw Tribal Longhouse. Burial will be at the Shapp-Stafford Cemetery, in Quapaw. FITZGERALD IVY CHAPEL 918-585-1151

The family of Charles Willliam Shawnee created this Life Tributes page to make it easy to share your memories.

Send flowers to the Shawnee family.