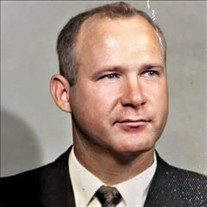 Charles Michael Sturm, born September 29, 1931 in Victoria, Texas, died at age 90 in Harrison, Arkansas on December 10, 2021. Charles was preceded in death by his first wife, Patsy Jean Lee Sturm (Pat), his mother and father, Julia Mary Slavik Sturm and Dick Herman Sturm, four brothers, Dietrich Herman Victor Sturm, Franklin Joseph Sturm, David Herman Sturm and wife Anza Buchanan, and Richard Anthony Sturm and wife Jesusa Ochoa; Brother-in-laws, Grace's husband John Joseph Gerace and Margaret's husband Don Lee Purdum. Surviving Charles is his beloved family: wife Barbara Mathis; children Carole Sturm, Michael Sturm and wife Joel, and Leigh Anna Sturm; Grandchildren,Safiyah Khan and husband Ibrahim Traore, Zakariyya Khan and wife Nikita Ahmed; Tanner, Maggie, Chip, and Meredith Sturm; Hailey, Melvin, Alexander, and Elizabeth Platt; Great-grandchildren Sulayman and Yousuf Traore, and Yahya Khan; brothers and sisters Grace Gerace, Margaret Purdum, Victor Sturm, Leonard and wife Jane Sturm, and Julie and husband Thomas Dolezal, as well as many nieces and nephews and other relatives and friends. Charles was the second born son. After his older brother died, Charles became the older brother to the next seven kids in the family, setting the example for the rest to follow. He served in the Army in Korea and Japan, and was awarded the Korean Service Medal, the UN Service Medal and the National Defense Service Medal. After graduating from the University of Texas, he worked for, and retired from, theU.S. Department of Labor's Wage and Hour Division, administering and enforcing some of the nation's most comprehensive labor laws. His career started in Shreveport (where he met Pat), followed by Corpus Christi, TX and then finally to Tulsa in 1967. Charles was active his whole life. He never lost his mental acuity, and even until the day of his death, could recall things an average person would have long forgotten. As the oldest surviving male Sturm, he was the star of our family reunions, and would relate stories about the family and his parents from when he was about 6 years old. He was a people person. We can't say that he never met a person he didn't like, but he liked and had a good word to say about almost everyone. After retirement, he and Pat moved to a farm near Porter, Oklahoma. He loved the life out on the farm and raised bees, cows, chickens, geese, rabbits, and other animals. After Pat died in early 2008, Charles went into a year of mourning to honor her. Before her passing, Pat told Charles that he "was not fit to be without a wife" and had instructed him to find someone to share the remainder of his life. He told many stories about that extensive online effort, his valiant search finding the perfect companion in Barbara. Together they moved to Harrison, Arkansas, and after ten years of marriage, Charles died with Barbara by his side. She says, "Our years together showed a man who was honest, upright, and moral in all things. He never wavered in doing something he felt was right. His clear thinking and insight helped us all. He set a standard that will be hard to meet, and he will be forever in my heart." Charles was much loved. He will be missed by all, and he will be remembered as our family patriarch. Visitation on Monday, December 27th at 6pm at Fitzpatrick Southwood Colonial Chapel on E. 91st Street, followed by Rosary at 7pm. Funeral Mass at St. Pius X Catholic Church at 10am on Tuesday, December 28th Internment at Calvary Cemetery after mass, followed by lunch at Fitzgerald Family Center.

The family of Charles Michael Sturm created this Life Tributes page to make it easy to share your memories.

Send flowers to the Sturm family.