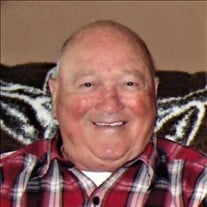 Bill passed away peacefully at the age of 91, surrounded by his family at St. Francis Hospital. Bill was born in Tulsa to William and Margarette Talley on November 8, 1930. He was the oldest of 10 children. He was a lifelong resident of Tulsa, graduating from Marquette High School. He excelled in football and baseball but found his passion in the sport of hydroplane boat racing. In 1959, one of his and his father's proudest moment came when he was awarded the National title of High-Point Boat Racing Champion of the United States. After serving in the United States Navy, he met and married Reba Woods on November 24, 1955, They celebrated 56 years of marriage before her passing in 2012. Bill retired as President of Modern Bindery, a family business where he spent his entire career. In retirement, he enjoyed family activities, spending time at the lake house, fishing, golfing, but most importantly, being a loyal fan of his grandchildren's activities. Bill was preceded in death by his parents, sisters: Norma, Ruth, and Marie. He is survived by his 3 daughters, Linda (Mark) Paczkowski, Brenda (Chris) Sloan, and Denise (Bill) Wrona. Grandchildren, Jeff (Brittney) and Craig (Alejandra) Paczkowski, Haley, Cory (Mallory), and Riley Sloan. Lexie (Tommy) Hess, and Charlie Wrona. Great-grandchildren, Talley, Piper, and Felix Paczkowski, Graham, Finn and Hank Sloan, Nora, and Cameron Hess. Brothers, Jim (Sue), Ray (Carol), Mack (Anne), Paul, Doug (Debbie). Sister, Betty (John)Moore Our dad "Papaw" was always fun, always laughing, and always teasing someone. Charlie-horses, toe-pops, and knee-squeezes were given out frequently! He has enriched our lives beyond measure and we will continue to hold him in our hearts forever. Visitation will be held from 4pm-6pm on Monday, February 14, with a Rosary to follow at 6pm. Both at Fitzgerald's Southwood Colonial Chapel. A Mass of Christian Burial will be held at 11:00 am on Tuesday, February 15 at The Church of St Mary, Tulsa. Contributions can be made to The Bishop Kelley Endowment Fund or The Wounded Warrior Project.

Bill passed away peacefully at the age of 91, surrounded by his family at St. Francis Hospital. Bill was born in Tulsa to William and Margarette Talley on November 8, 1930. He was the oldest of 10 children. He was a lifelong resident of Tulsa,... View Obituary & Service Information

The family of Charles William Talley created this Life Tributes page to make it easy to share your memories.

Bill passed away peacefully at the age of 91, surrounded by his...

Send flowers to the Talley family.