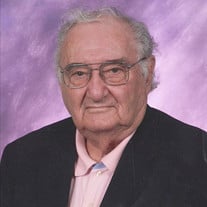 Charles W. Ward, Jr. died on November 23, 2020 in Tulsa. He was 96. Charles was born on Sept. 11, 1924 in Midwest, Wyo. to Monetta (Huckabee) and Charles Ward, Sr. Charles Sr. was an oil wildcatter who took his family on adventures throughout... View Obituary & Service Information

The family of Charles William Ward created this Life Tributes page to make it easy to share your memories.

Send flowers to the Ward family.