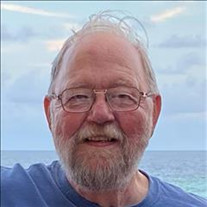 Charles D Whitson passed peacefully into his next life on Sunday, April 24th. Otherwise known as "Denny" by family and friends, he was born in Hobart, Oklahoma on September 14, 1942. He had spent his youth in various parts of Oklahoma, graduating from Sapulpa High School in 1961. He left the state when he joined the Air Force, serving in both Japan and Omaha, Nebraska at the Strategic Air Command Headquarters. It was in Omaha where he met his beloved wife, Marilyn, who preceded him in death in 2015. He and Marilyn were blessed with two children � Valerie Whitson Stovall of Pittsburgh, Pennsylvania, and Charles Whitson II, of Tulsa, Oklahoma. Thereafter, he and Marilyn embraced two much-loved grandchildren, Catey Stovall and Eli Whitson. Charles lived a humble life, rich in family and friends. He (mostly) enjoyed his long and diligent career in the insurance industry, and he had a strong devotion to God. His passion for traveling led him to explore countries abroad with Marilyn and his friends from the St Mary's community, as well as road trips to visit family and lifelong friends. He had a love for playing guitar, raising his revered dog Obie, and a fondness for photography. His endeavors sometimes took a little shine off his personality, and he could get a little grumpy, but he was quick to forgive with a big hug and a sincere, "I love you." In his later years, he prioritized staying active in the church and helping those in need. Since childhood, Charles had retained an extensive love of airplanes and flying. One of his heroes was Chuck Yeager and he was very fond of the phrase, "Any landing you can walk away from is a good one". Charles also quipped that it was better to sit in the rear of a plane when flying because, "Have you ever heard of a plane backing into a mountain?" He spent hours in his "playhouse" (workshop) building radio-controlled model airplanes, some of which did not survive their maiden flight. Amidst his later years, he resided near the Jenks airport, where he would take pleasure in watching the planes fly above his backyard. Charles will be greatly missed, not just by those who had known him for a lifetime, but also those who had only met him briefly. While some may not have had the privilege of knowing him as dearly as others, he left great influence on those that were close to him. Charles was kind, devoted, giving, and had a sense of humor that grew exponentially over the years. He left this world with a smile on his face and his last pearls of wisdom. "Don't be sad" and "Go live your life". And we have always done what Dad told us to do.

Charles D Whitson passed peacefully into his next life on Sunday, April 24th. Otherwise known as "Denny" by family and friends, he was born in Hobart, Oklahoma on September 14, 1942. He had spent his youth in various parts of Oklahoma, graduating... View Obituary & Service Information

The family of Charles Whitson, Sr. created this Life Tributes page to make it easy to share your memories.

Charles D Whitson passed peacefully into his next life on Sunday,...

Send flowers to the Whitson family.