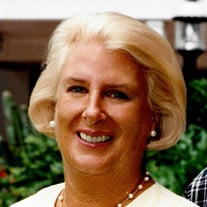 Claire Fisher Lauinger, former longtime Tulsan and wife of retired business publisher Philip C. Lauinger, Jr., died July 1st in Dallas, TX after an extended illness. She was 83. Claire was born in Detroit, MI, and moved to Tulsa in 1958 when she married her husband of 62 years, Phil. She was the daughter of Louis and Virginia Fisher of Grosse Pointe Shores, MI, and the granddaughter of William A. and Lura M. Fisher of Detroit, and William J. and Jennie C. Nesbitt, also of Detroit. William A. Fisher was a founder of Fisher Body Company which supplied motor vehicle bodies to General Motors Corporation beginning in 1910. She attended the Convent of the Sacred Heart, Grosse Pointe, for elementary and high school, and graduated from Georgetown Visitation College, Washington D.C. in 1958. During these years she became an accomplished bowler and field hockey player. In Tulsa, Claire became the extraordinary mother of four children, while in the same stride committing herself to a select number of community organizations. These included Monte Cassino, Cascia Hall and Bishop Kelley schools, Meals on Wheels, the Junior League of Tulsa, and her church communities of Christ the King Catholic Church and Holy Family Cathedral. She also pursued the game of tennis which quickly became her favorite sport. She made many friends on the clay courts of the Tulsa Tennis Club and was a fierce competitor who won and lost with equal grace. Claire was the family trailblazer in 1988 in establishing a seasonal home at John's Island in Vero Beach, FL. Again tennis was her embarkation point to a new set of deep friendships which she maintained for many years. She also contributed substantially to the visual and performing arts in Vero Beach, and was a longstanding Board Member for the Distinguished Lecturer Series at the Riverside Theater in Vero Beach. Claire was known by friends everywhere, and especially by her husband and family, as unfailingly thoughtful and generous, intensely loyal, and totally without pretension. She was simply herself, always and everywhere. She was the centerpiece and the heart of her family and was beloved by her eleven grandchildren. She is survived by her husband, Phil, Dallas, TX; children, Philip III (Anne), Steamboat Springs, CO, Anne Reysa (John), Austin, TX, Mark (Allison), Tulsa, OK, and Jennifer Lofgren (Richard), Plano, TX; grandchildren, P.C. IV (Beth), Christopher (Liya) and Jake Lauinger, Natalie and Matthew Reysa, Sophie, Daley and Hayes Lauinger, and Claire, Allison and Joe Lofgren; great-grandson, Asher Lauinger; and sister, Anne Dingeman of Grosse Pointe Woods, MI. A Rosary Service will be held Sunday, July 11th at 5:00 p.m. at St. Rita Chapel, Cascia Hall School, in Tulsa. The Funeral Mass will be held Monday, July 12th at 10:00 a.m. at Holy Family Cathedral, in Tulsa. There will be a private burial at Calvary Cemetery in Tulsa. In lieu of flowers, donations can be made to the Alzheimer's Association or Catholic Charities of Eastern Oklahoma. Fitzgerald Ivy Chapel, 918-585-1151

The family of Claire Fisher Lauinger created this Life Tributes page to make it easy to share your memories.

Send flowers to the Lauinger family.