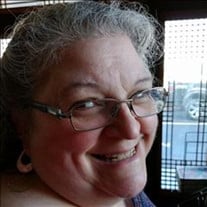 Connie Jane (Woody) Motes passed away Monday, January 17th, 2022 in St. John's Ascension hospital in the early morning hours. She was born near Nashville, Tn June 17th, 1964 and lived in east Tennessee most of her younger life. She graduated valedictorian at the age of 15 from Harrison-Chilhowee Baptist Academy and went on to finish a degree in education from Carson-Newman College in 1985. In the same year, the day after college graduation, she married the love of her life, G. Ward Motes, Jr (also a native of east Tennessee and also a graduate of Carson-Newman). She is survived by her husband, Ward, her eldest son, Stephen, his wife, Lexi, Connie's grandchildren, Eren (Nevaeh) and Ayden, Connie's middle son, Philip, and wife, Chenoa, and Connie's youngest son, Jesse. She is also survived by her sister Sunshine Vandever, husband, Steve; her nephew, Nathan Woody, his wife, Jenny and their cherished children. She was preceded in death by her parents, Rev. Henry Wade Woody and Mary Jane (Flynn) Woody and brother, James Woody; who is survived by his wife, Robin, and daughters, Sarah and Hannah. She is also survived by many aunts, uncles and cousins. Connie served in many churches in many capacities, but her dearest time was as secretary to Trinity Baptist Church working with Pastor Richard Kerr and the many members there that she still fondly remembered. She worked for 13 years for Sun Microsystems either as an office manager or in human resources in numerous states including North Carolina, Virginia, Texas and, finally, Tulsa, Ok. Recently, she returned to work with human resources with Helmerich and Payne doing what she loved; helping people, especially those in both tough situations and times. She truly thrived during her time there and thought a great deal of the people she worked with. She had an unwavering faith in God and trust in her savior, Jesus Christ. She tried to show her love for both in the way she treated others, served her fellow believers and by bringing a bit of light with her to a dark world. Most will remember her for her bright and uplifting demeanor and her gracious way with people. Services will be held at Fitzgerald's on 91st near Harvard on Monday, January 24th at 1 PM central time. Leading this celebration of Connie's life will be her pastor, Rev. Richard Kerr. Services will be streamed for those not able to attend. In lieu of flowers, we ask you to consider making a donation in Connie's name to the Gideons for the distribution of God's word. https://www.sendtheword.org/

Connie Jane (Woody) Motes passed away Monday, January 17th, 2022 in St. John's Ascension hospital in the early morning hours. She was born near Nashville, Tn June 17th, 1964 and lived in east Tennessee most of her younger life. She graduated... View Obituary & Service Information

The family of Connie Jane Motes created this Life Tributes page to make it easy to share your memories.

Send flowers to the Motes family.