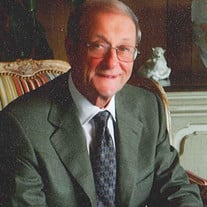 Dave R. Sylvan Dave Sylvan passed away on Saturday, April 25 in Tulsa, Oklahoma surrounded by his loving family. Dave was born in Chicago, Illinois to Edith and Morris Sylvan. They moved to Tulsa when Dave was 7 years old. He graduated from Central High School and went to the University of Oklahoma before being drafted in to the army. He served in the army in the South Pacific in World War II before being honorably discharged in 1944. Dave returned to Tulsa, to work in his father's printing business for several years. He later joined his brother-in-law, Ben Altman in forming Altman-Sylvan Oil Company. They later separated and Dave formed Sylvan Oil Operating Company and bought the Farmers Energy properties. Dave was an avid tennis player, loved the oil and gas business, the stock market, all sports and traveling the world. He was a real "people" person and had a zest for life. Dave served on the Jewish Federation Foundation Board, a member of Shriner's, Wildcatter's Club in the Oklahoma Independent Petroleum Association, a member of the International Petroleum Association, Jewish Federation Investment Committee, supported Tulsa Tomorrow and Tulsa Opera Board. In May, 1972, Dave married Barbara Breeding. Dave is predeceased by his parents, Edith and Morris, by his sister, Jeanette Altman Frieden and by his brother, Jay Sylvan. He is survived by his wife, Barbara, daughter, Debbie (Robert) deLeeuw, sister-in-law, Anne Ownby, by his brother-in-law, Larry (Rebecca) Breeding and many loving nieces, nephews, cousins and many, many friends. The family would like to thank Jerry Schuster, Beryl Bolo and Cissy Ssettimba for their loving care. Donations in Dave's memory can be made to the Tulsa Jewish Federation Camp Scholarship Fund, Congregation B'nai Emunah Transportation Fund, Zarrow Pointe, Miller Hospice or the charity of your choice. Private family services were held Monday. Fitzgerald Ivy Chapel, 918-585-115

Dave R. Sylvan Dave Sylvan passed away on Saturday, April 25 in Tulsa, Oklahoma surrounded by his loving family. Dave was born in Chicago, Illinois to Edith and Morris Sylvan. They moved to Tulsa when Dave was 7 years old. He graduated from... View Obituary & Service Information

The family of Dave Ralph Sylvan created this Life Tributes page to make it easy to share your memories.

Send flowers to the Sylvan family.