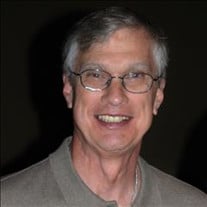 David "Dave" Marcum Sollars was born on Christmas Eve 1946 to Charles "David" and Jane (Marcum) Sollars in Dayton, Ohio. Following the death of his father in 1952, Dave's family eventually moved to Tulsa where Dave graduated from Holland Hall in 1965. Dave then went on to attend Oklahoma State University in Stillwater where he earned a degree in business marketing, followed by a Master's Degree in Industrial Engineering. More importantly, while at OSU Dave met Carol Bennett, the love of his life. Dave and Carol were married Dec. 28, 1968 in Bartlesville, OK, and settled in Tulsa where they raised their three daughters. Being the original and ultimate "Girl Dad," Dave truly believed there was no limit to what his daughters could do. He coached their soccer teams, taught the girls how to play basketball and street tennis, throw a spiral, fostered their love of all things OSU, and enthusiastically supported them in every activity and endeavor they took on. Sailing on Grand Lake in the summertime provided some of the girls' favorite memories with their dad growing up. Dave was part of the Leadership Tulsa class of 1991 and was an active supporter of Pathways Adult Learning Center, the Autism Center of Tulsa and Best Buddies of Oklahoma. He also served as Chairman of the Board of Western Neighbors of Tulsa, a social welfare organization, as well as board chair and deacon of his church. Dave worked in the oil and gas industry and spent much of his professional life employed at Amoco working at their Research Center. His last employment was with Tulsa Community College as the associate dean of math, science, and engineering technology at its Northeast campus. This was a job he loved and felt truly in his element. Dave's crowning achievement while at TCC was his role in the creation and development of TCC's Aviation Center at Jones Riverside Airport. Following his retirement from TCC, Dave and Carol began their travels to dream destinations around the world, his favorite being New Zealand. Family was the absolute joy of Dave's life and he relished the role of Poppy to his nine grandchildren. From game nights and beach trips to deep discussions and adventures in the mountains of Colorado, Poppy was in the middle of everything and he was adored by all. Dave was his family's greatest cheerleader, supporter, advisor, and encourager. He brought positivity and light with him wherever he went, and we are better people because of his love for us. Dave's legacy will live on through his family, of which he was so proud. He is survived by his wife, Carol, and his daughters and their families: Jana, Chas, Grant and Caroline Ketchel; Jennifer, Josh and Reagan Miller, and Reagan and Josh's dad, John Miller; Julie and Paul Gillett, and their children, Gavin, Keely, Logan, Hayden and Aubrey. Dave is also survived by sisters Bonnie (Frank Miller) Johnston of Mason, OH and Robin (Les Kreger) Hill of Dallas, as well as brother-in-law and sister-in-law, A.L. and Terri Bennett of Tulsa, along with many beloved nieces, nephews and cousins. Dave was preceded in death by his parents, David and Jane Sollars, his in-laws, A.L. and Blanche Bennett, who loved him like a son, and nephew, Scott Hill. Dave was a lover of dachshunds and will be especially missed by Chloe and Jack. Dave has already provided our family with proof of his presence in heaven as, on the day he died, OSU won and OU lost their respective football games! Due to Covid-19 concerns, the family will be having a private memorial service at Bennett Chapel on the OSU campus. A celebration of Dave's life will take place at a later date. In lieu of flowers, please consider donating in Dave's memory to Best Buddies of Oklahoma c/o Best Buddies International, 100 SE 2nd St., Ste. 2200, Miami, FL 33131; or Pathways Adult Learning Center, 4102 E. 61st St., Tulsa, OK 74136.

The family of David Marcum Sollars created this Life Tributes page to make it easy to share your memories.

David &quot;Dave&quot; Marcum Sollars was born on Christmas Eve 1946 to...

Send flowers to the Sollars family.