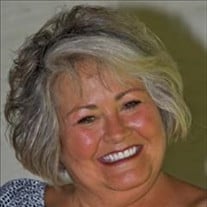 Deborah Ann Martin Deborah A. Martin, 67, of Inola, passed away peacefully at the Franciscan Villa, Broken Arrow on Sunday, April 19, 2020. She was the devoted wife of John R. Martin, Sr. with whom she would have celebrated their 46th wedding anniversary in June. She is survived by two children, John (Husband of Kim) Martin of Strasburg, PA, and Jayma Hower of Manheim, PA. Also surviving are 4 grandchildren, Makenna and Kaylee Martin of Strasburg, PA, Kellen Hower of Manheim, PA, and Ashlynn Hower of Red Lion, PA; her brother, James (Husband of Angela) Loller, Sr. of Inola, OK; as well as many nieces and nephews who she loved dearly. Her first great-grandchild is expected in the fall of 2020. Born in Wilmington, Delaware, she was preceded in death by her father, John R. Loller, mother, Barbara L. Langiewicz, and step-father, Chester M. Langiewicz. Deborah was a direct descendant of William Bradford, the 2nd Governor of the Plymouth Colony, who emigrated from Northern England aboard the Mayflower. She was a proud member of the Massachusetts Society of Mayflower Descendants. Tenderly known as "Debbie" to family and friends, she was a member of Saint Cecilia Catholic Church of Claremore where she volunteered for many years as an early age CCD teacher. Debbie worked in the medical industry ultimately retiring as a medical claim analyst in Lancaster, PA. In retirement she loved to travel "back east" to see her children, grandchildren and friends. She was also a member of the Epsilon Sigma Alpha (ESA) Gamma Pi Chapter. She will be remembered for her loving, kind, and fun nature. The Martin family would like to thank the staff of Franciscan Villa for the loving care which Debbie received, and the constant kindness shown to her husband, John. Visitation will be held on Tuesday, May 19th, 2020 from 1:00-3:00pm Services will be held on Wednesday, May 20th, 2020 at 10:00 am, at Fitzgerald Southwood Colonial Chapel.

Deborah Ann Martin Deborah A. Martin, 67, of Inola, passed away peacefully at the Franciscan Villa, Broken Arrow on Sunday, April 19, 2020. She was the devoted wife of John R. Martin, Sr. with whom she would have celebrated their 46th wedding... View Obituary & Service Information

The family of Deborah Martin created this Life Tributes page to make it easy to share your memories.

Deborah Ann Martin
Deborah A. Martin, 67, of Inola, passed away...

Send flowers to the Martin family.