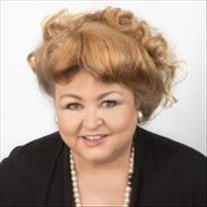 Debra Faith Orlowski-McMahan of Tulsa, OK passed away on November 8, 2020 at home after a brief illness. Faith was born on July 28, 1954 to Dr. Frank and Donnie Orlowski in Cape Girardeau, Missouri. The family moved to Texas where, after graduating from high school, Faith attended the University of Texas at Austin. Faith graduated Phi Beta Kappa receiving her Bachelor of Arts with Highest Honors in 1975 and her Juris Doctor from the University of Texas School of Law in 1978. Upon graduation she became one of the first female attorneys hired by a major law firm in Tulsa when she was employed by Sneed Lang, PC. Most recently she was associated with Moyers, Martin, LLP. Faith was an adjunct professor at the University of Tulsa law school in the Master of Jurisprudence program. Faith received many awards throughout her extensive and impressive legal career. She was an active member of the Tulsa County Bar Association where she served as President from 2011-2012. She was a frequent national and regional lecturer on oil and gas, real property, Indian land law and estate planning topics. Faith is recognized by her peers as a brilliant lawyer, mentor, leader and dear friend. Faith's reputation as an animal rights activist was evidenced by her volunteer activities as a board member on the Tulsa SPCA Board and a number of other animal rights and rescue organizations. She founded the Tulsa County Bar Association Animal Law Committee. Faith was active in the community throughout her career. Among others, she served on the board of Emergency Infant Services, was a founding member of Executive Women's Forum and a graduate of class 10 of Leadership Tulsa. Faith would say that her greatest achievement was that of wife, mom, and Nana. She met William G. McMahan (Bill) soon after moving to Tulsa. Faith and Bill were married on November 21, 1981 and enjoyed 37 wonderful years of marriage. With her marriage came two extraordinary kids. Faith loved that even though she did not have biological children, she was able to enjoy and experience the blessings that come with parenthood and claimed Greg and Melinda as her own. Faith was preceded in death by her husband Bill McMahan, mother, Donnie Orlowski and father, Frank Orlowski. She is survived by son, Greg McMahan (Carrie) of Tulsa, daughter, Melinda Barker of Oklahoma City, grandchildren, Becca, Kaitlin, Sydnie, Will and Ian, sister, Katy Tuttle (Kevin) Richland Hills, TX, brother, Frank Orlowski of Dallas, TX and a host of nieces, nephews and extended family who will miss her immensely. Memorial Service to be held November 20, 2020 at 10:00 a.m. at Fitzgerald Southwood Colonial Chapel, 3612 E. 91st Street, Tulsa. The Rosary will be prayed prior to the Memorial Service at 9:00 a.m. In lieu of flowers, please consider a donation to the Tulsa SPCA.

Debra Faith Orlowski-McMahan of Tulsa, OK passed away on November 8, 2020 at home after a brief illness. Faith was born on July 28, 1954 to Dr. Frank and Donnie Orlowski in Cape Girardeau, Missouri. The family moved to Texas where, after graduating... View Obituary & Service Information

The family of Debra Faith Orlowski-McMahan created this Life Tributes page to make it easy to share your memories.

Debra Faith Orlowski-McMahan of Tulsa, OK passed away on November...

Send flowers to the Orlowski-McMahan family.