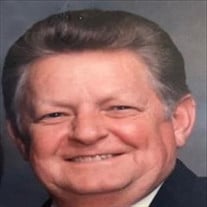 Rev. Delbert Wayne Brooks was born during the Great Depression in Evant, Texas on April 18, 1932, to the late Wilber and Era Brooks. He was the second eldest of five boys. His family farmed and his parents instilled a great work ethic that translated through his life and ministry. As a young man, he fell in love with Joy Sherrill and they were married on March 21, 1952. In 1953, they were blessed with a baby girl, Debra Lynn and in 1955, a son, David Louis. While raising his young family, he worked for Texas Eastman for a little over 11 years. He moved his family in 1964 to Jeffersonville, Indiana to study for the ministry. His calling led him to pastor churches in Texas, Oklahoma, and Mississippi for over 50 years. Rev. Brooks served as Vice-President for Christ Gospel Churches International for many years. Throughout his life, Rev. Delbert Wayne Brooks ministered to thousands all over the world sharing the gospel of Jesus Christ. He lived his life with integrity, love of his wife and family, and a desire to please the Lord. At the time of his passing, Rev. Delbert W. Brooks was licensed and ordained through Seven Pillars Church International, sharing the Word of God through a Bible Study Live streamed all over the world. Delbert is preceded in death by his mother, Era Brooks, his father, Wilber Brooks, and brother, Charles Douglas Brooks. He is survived by his loving wife, Betty Joy Brooks, his children, Debra Lynn Hill (Charles) and David Louis Brooks (Kay), his grandchildren, Jason Ray Hill, Daniel Louis Brooks (Charmin), and Julie Anne Bush (Steve), his great-grandchildren, Kelsey Harstrom, Braeden Hill, Dalton Brooks, Chloe Hill, Delbert Brooks, and Camilla Hill, and his brothers, Don Brooks, Billy Brooks, and Dale Brooks. Rev. Delbert Wayne Brooks left this world at the age of 88 years to be with Jesus on June 5, 2020. He is loved and will be greatly missed by his wife, family, and thousands around the world.

Rev. Delbert Wayne Brooks was born during the Great Depression in Evant, Texas on April 18, 1932, to the late Wilber and Era Brooks. He was the second eldest of five boys. His family farmed and his parents instilled a great work ethic that... View Obituary & Service Information

The family of Delbert Wayne Brooks created this Life Tributes page to make it easy to share your memories.

Rev. Delbert Wayne Brooks was born during the Great Depression...

Send flowers to the Brooks family.