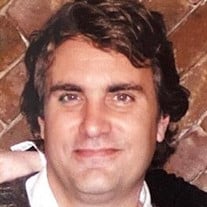 Dennis Carroll Donnelly passed away on June 5, 2020. He was born on November 6, 1967, in New Rochelle, NY to Ronnie and Fred Donnelly. Dennis attended Sts. John and Paul School, Larchmont, NY, played youth soccer and swam competitively for the Larchmont Yacht Club. When his soccer team won the area championship, Dennis had the honor of receiving his trophy from soccer great, Pele. In Tulsa, Dennis attended Monte Cassino and Cascia Hall, where he played soccer, wrote for the school paper and edited the yearbook. As a junior, he was selected for the Umbro National Youth Soccer Team and he competed in England that year. In 1985, he graduated from Cascia Hall as valedictorian with highest honors and headed to Dartmouth College, Hanover, NH. At Dartmouth, Dennis played soccer for two years, which included competing in Scotland. He also wrote for the college paper and yearbook and studied in Toledo, Spain. After graduation in 1989, Dennis taught English in Hong Kong and Thailand before returning to Tulsa. His various endeavors in Tulsa included Associate Editor of Uptown News, co-founder of literary journal Barbed Wire, writing curriculum for and teaching at Tulsa English Institute, and, ultimately, writing curriculum for and teaching at the newly-formed San Miguel Middle School. He also tutored many newly-arrived Tulsans in idiomatic English usage. Dennis continued playing soccer all of his adult life and his teams won many local championships. Over the years, he shared strong bonds with his soccer teammates. His kind, generous spirit, humility and quick wit earned him numerous life-long friends. He appreciated the rebel and the underdog and treated each person equally without judgment. An accomplished musician, Dennis wrote music and played bass guitar with local band, Jam Econo. Sharing his love of music led him to start a music program with donated instruments at San Miguel. Dennis had a vast knowledge of both music and literature and he had a huge collection of vinyl albums, musical instruments, and books. He was a prodigious writer of poetry and, in fact, he read two of his poems at his father's memorial service in May. As a teacher, Dennis challenged his students by introducing them to classic literature and encouraging learning in all areas as a lifetime endeavor. His association with his students stretched beyond the classroom to family events and life's milestones. While teaching at Tulsa English Institute, it was not unusual for Dennis to invite students from Japan, South America, the Middle East and Africa to dinner. At his request, his family hosted many students in their home for the months of their studies. Throughout his life, Dennis traveled widely for business and pleasure to Hawaii, Mexico, Thailand, Ireland, Columbia, Saudi Arabia, Peru, and all over Europe. After a trip to Peru, Dennis and a friend began Sacred Valley, an import business bringing rugs, alpaca and vicuna sweaters, coats and scarves as well as folk pottery to Tulsa. The Gilcrease Museum purchased Sacred Valley rugs for their collection. Dennis was predeceased by his beloved father, Fred. He is survived by his partner, Dana Deere; his mother Ronnie; siblings Amy, Andrew (Jennifer), Sarah (Ed Moncada), Cathryn, Meghan (Thomas Fredet); nieces and nephews Emma, Liam, Ava and Connor Donnelly and best friend, Dan Diver. To honor Dennis' memory, the family has established the Dennis Donnelly Memorial Scholarship at San Miguel School and at Cascia Hall. Fitzgerald Ivy Chapel, 918-585-1151

The family of Dennis Carroll Donnelly created this Life Tributes page to make it easy to share your memories.

Send flowers to the Donnelly family.