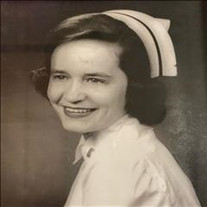 Dianne Hill of Sand Springs, Oklahoma passed away on February 24, 2021. She was 85 years old. She was preceded in death by her husband Jack Hill in September. She is survived by her sister, Gayle Zimmerman, brother Don Zimmerman, daughter Kristi Hill, grandchildren Jeremy Edwards and Brandice Edwards, and great-grandson Jace Phillips. Her oldest daughter, Tracie Hill, passed in 2011. Dianne was born in Oklahoma City. After high school, Dianne attended the St. John School of Nursing at St. John Hospital, graduating as a Registered Nurse in 1957. After nursing school she worked at St. John as an RN in Med-Surg, the Emergency Room and her favorite, the Operating Room. She met her husband, Jack, at St. John in the elevator while he was performing his duties working for Fitzgerald's Funeral Home. They married in 1958 and were side by side until the end. Dianne became a housewife after her first daughter was born. She was extremely involved in her girls lives, supporting them in athletics, Girl Scouts, cheerleading and every activity that her daughters participated in. She was also very heavily involved with Jack in the Shriners Organization, being a member of the Ladies Oriental Shrine and supporting events and helping organize the transports for children to the various Shriners Hospitals throughout the country. Dianne loved her family first and foremost. She spent her days doing everything for her daughters and her grandchildren. She was the best mother and grandmother any person could ask for, teaching strength, independence and discipline wrapped in love, caring and kindness. She was able to pass away peacefully at home, with her family by her side, and go be with Jesus and the love of her life for 62 years. A memorial wake will be held at the family home on Saturday, March 13, 2021. In lieu of flowers the family's asks that donations be made to the Shriners Hospitals for Children and/or the American Cancer Society. Fitzgerald Ivy Chapel, 918-585-1151

Dianne Hill of Sand Springs, Oklahoma passed away on February 24, 2021. She was 85 years old. She was preceded in death by her husband Jack Hill in September. She is survived by her sister, Gayle Zimmerman, brother Don Zimmerman, daughter... View Obituary & Service Information

The family of Dianne Hill created this Life Tributes page to make it easy to share your memories.

Dianne Hill of Sand Springs, Oklahoma passed away on February...

Send flowers to the Hill family.