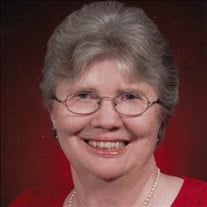 Dolores Marie (Piech) Frenier, loving wife and mother of two children passed away too soon at age 76 on Sunday April 25, 2021 in Tulsa, Oklahoma. Dolores was born in Detroit, Michigan on July 29, 1944 to Leo and Vera (Schick) Piech. She graduated from Regina High School in 1962 and Mercy College in 1966, both in Detroit. In 1993, she received her Master's in Reading from NSU in Tulsa. She was a lifelong educator and taught in several schools in Detroit, Michigan, Tulsa, Oklahoma, and Houston, Texas. She completed her education career as a principal at a Catholic School in Houston. She was a wonderful wife, mother, and grandmother. Dolores met Wayne Frenier on a young adult Catholic ski trip. She married him on August 18, 1973. They have two children Andrew and Kathleen. Dolores grew up in Detroit, the eldest of four siblings. After graduating college, she began teaching in Detroit and then moved to Midland, Michigan when she married Wayne. In 1977, she followed her husband to Tulsa, Oklahoma with two small children in tow. Tulsa became her hometown. She lived for 10 years in Houston, Texas, but returned to Tulsa immediately following Wayne's retirement in 2004. She even picked out and purchased a home a full year before he retired to make sure she had a home base for activities and family gatherings. Service to others, especially children, was a particular delight. She taught in several public and Catholic Tulsa schools, where many kids remember her fondly. After retirement from formal teaching, Dolores continued to teach and serve others by volunteering at Gilcrease Museum as a docent with the volunteer group the Gillies. She also volunteered and ran the afterschool tutoring program for many years at the Church of the Resurrection to help local school kids with their reading and math. However, her true joy was her 4 grand children who all lived nearby in Tulsa, Oklahoma. Grandma was always a yes to transport the grandkids to various activities, have a sleepover, or watch the kids in whatever activity they participated in. She followed the grandkids to dance recitals, sporting events, plays, school events, and anything else they were involved in. Dolores is preceded in death by her parents Leo and Vera. She is survived by her husband Wayne of Tulsa, her son Andrew of Tulsa and wife Dr. Renee Frenier, daughter Kathleen of Tulsa and husband Dr. Scott Turner, her grandchildren, Isabella, Maggie, Genevieve, and Oliver; her brothers; David Piech, and his wife, Nancy, and Joe Piech, and his wife, Patsy, and sister, Donna Vogt, and her husband, Ron, and numerous nieces and nephews. Her family would like to thank all her friends for many years of companionship and love. There will be a Rosary on Tuesday, May 4, 2021 at 9:30 am with the Funeral Mass to follow at 10:00 am at the Church of the Resurrection in Tulsa, OK. Address is 4804 S Fulton Ave Tulsa, OK. Donations may be made to St. Jude Children's Hospital www.stjude.org or a charity of your choice.

Dolores Marie (Piech) Frenier, loving wife and mother of two children passed away too soon at age 76 on Sunday April 25, 2021 in Tulsa, Oklahoma. Dolores was born in Detroit, Michigan on July 29, 1944 to Leo and Vera (Schick) Piech. She graduated... View Obituary & Service Information

The family of Dolores Marie Frenier created this Life Tributes page to make it easy to share your memories.

Send flowers to the Frenier family.