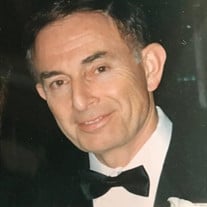 Don Harris Rotenberg of Tulsa, Oklahoma passed away peacefully at home on March 29, 2021 with his loving family by his side. He was the only child of Morris H Rotenberg and Helen (Harris) Rotenberg. He was the beloved husband of Barbara, with whom he shared 62 wonderful years of marriage. He was loving father to Laura (Rotenberg) Yeager and her husband Jeff of Pittsfield, MA and to Debi (Rotenberg) Heims and her husband Steve of Sedona, AZ. He was cherished "Poppy" to his three grandchildren, Emily Yeager, Kalman and Danielle Heims. Don was born and raised in Portland, Oregon with a driven pursuit of scientific achievement. As a graduate of University of Oregon, he was the president of his senior class, and a member of both the Phi Beta Kappa and Sigma Xi honor societies. Don received his Master of Science from Harvard and his Ph.D. in Chemistry from Cornell University where he met Barbara, the love of his life. Don's schooling led him to a successful career working with polymers in the optical field, he played a significant role in the change from glass to plastic lenses, worked with resistant coatings, photochromatic plastic lenses, contact lenses and protective goggles. He worked for Exxon as the Senior resident chemist and followed with a 20-year career at American Optical Company as Director of Materials and Processing and eventually as Vice President and General Manager. Don developed several patents for polymer optical products that have had a lasting impact on the industry. Don enjoyed playing golf and won the Esso Golf championship in 1964. He played softball with the over-forty men's league in Westborough Massachusetts and would be seen playing tennis every Sunday with friends both in Massachusetts and in Tulsa. Don and Barbara moved to Tulsa in 1989 where he continued to work as a consultant in the plastics industry and playing his sports. Don and Barbara loved to travel and visited many countries including Italy, England, France Portugal. Thailand, China, Australia and New Zealand. Don loved working on the Sunday crossword puzzle with Barbara and going for long walks. Due to COVID-19 the funeral service will be private. A celebration of Don's life will be held at a later date when we are able to come together and gather. In lieu of flowers, the family asks that charitable contributions be made to: * The Michael J Fox Foundation at www.michaeljfox.org * Zarrow Pointe at 2025 E. 71st Street, Tulsa OK 74136 www.zarrowpointe.org * Miller Hospice at 6950 S. Utica Avenue, Tulsa OK 74136 www.MillerHospiceTulsa.com Fitzgerald Ivy Chapel, 918-585-1151

Don Harris Rotenberg of Tulsa, Oklahoma passed away peacefully at home on March 29, 2021 with his loving family by his side. He was the only child of Morris H Rotenberg and Helen (Harris) Rotenberg. He was the beloved husband of Barbara, with... View Obituary & Service Information

The family of Don Harris Rotenberg created this Life Tributes page to make it easy to share your memories.

Send flowers to the Rotenberg family.