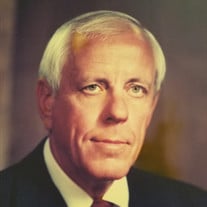 Donald B. Atkins passed away peacefully on August 21, 2020. Don was born on September 3, 1929 in Ardmore, OK as the only child of Clarence and Marie Atkins. Don graduated from Ardmore High School where he was awarded the outstanding male senior student and attended Boys State. He went on to the University of Oklahoma where he was a member of Phi Gamma Delta fraternity and graduated with an Accounting degree in 1951. Within 30 days of graduation, Don married Ellen Colley, in Tulsa, OK, and reported to the Air Force, in San Antonio, TX. After nearly two years in the Air Force, mostly in Greenland, Don returned to Tulsa and went to work as a CPA and simultaneously attended night law school at the University of Tulsa and graduated in June of 1958. Don practiced law in Tulsa for over 50 years, founding Atkins and Atkins, P.C. in 1989, which is still being run by his son, Blake Atkins, and grandson, Price Atkins. Don served as President of the Tulsa Club and Southern Hills Country Club in consecutive years. He was also a long-time board member and one-time Vice-Chairman of the Board of Trustees of Saint Simeon's Episcopal Home, a multi-term member of the Vestry and Treasurer at St. John's Episcopal Church, and a Board Member of numerous private companies in the Tulsa area. Don and Ellen Atkins were married for over 69 years. Don and Ellen have three children; Leslie Atkins Pritchard, her husband Bob Pritchard and their son Marshall Pritchard; Blake Atkins, his wife Mandy Atkins, and their three children, Price Atkins, Audrey Grossman and Emma Atkins; and Mark Atkins, his wife Latoya, and their two children Natasha Atkins and Tavish Cagle. Other than being a tireless worker and advocate for his clients, who were also typically his friends, he enjoyed being involved in the Tulsa community. Don and Ellen literally traveled the world; first by biking and hiking throughout North America and Europe, then multiple photo safaris in Africa, countless trips to Australia, New Zealand and South America, and finally cruises in nearly every ocean and waterway of the world. We all remember Don's zest for life, his dry sense of humor, his loyalty, his dedication to exercise with the Tulsa Club Running Class, and most of all, his caring and servant-oriented spirit. His love of music will be memorialized through his and Ellen's gifts toward the refurbished organ at St. John's and a Clavinova at St. Simeon's. A Memorial Service may be held at a date to be determined. Please direct any honorariums to either St. John's Episcopal Church, 4200 S. Atlanta Pl., Tulsa, OK 74105 or St. Simeon's Episcopal Home, 3701 Martin Luther King, Jr. Blvd, Tulsa, OK 74106. Fitzgerald Ivy Chapel, 918-585-1151

Donald B. Atkins passed away peacefully on August 21, 2020. Don was born on September 3, 1929 in Ardmore, OK as the only child of Clarence and Marie Atkins. Don graduated from Ardmore High School where he was awarded the outstanding male senior... View Obituary & Service Information

The family of Donald Bronson Atkins created this Life Tributes page to make it easy to share your memories.

Send flowers to the Atkins family.