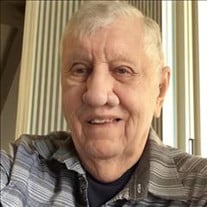 Donald Ray Green, age 90, died on April 18th, 2022, in Tulsa, OK.He was born on November 20th, 1931 in Oklahoma City, OK, to parents Hazel Ynoka Pitman and William Green. He graduated from Crooked Oak High School and then Oklahoma City University.He met the love of his life, Jackilyn Dee Luttrell, while he was working as an oilfield roughneck, they married in Payne, OK on February 6th, 1953. He always said meeting her "saved his life", and she continued to support and honor him for 69 years of marriage. They moved across the country to Virginia together when he joined the Army, embarking on a grand adventure before returning to the land of his ancestors in Oklahoma. He rose through the ranks of Albert Equipment Company, selling the machines of industry from 1977 to his retirement in 1989.He was a decedent of the mighty Mvskoke-Creek Nation, and a proud Korean War veteran. Don was a true Tvstvnvke ("warrior") for his family. He loved the outdoors, and spent many days camping and fishing.Don was also an amazing golfer, and many of those who frequented the Indian Springs Country Club will recall his prowess on the links, and his legendary status in the clubhouse. He was a craftsman in every sense of the word. From crafting his own golf clubs, to creating wooden cars that won the Pinewood Derby every year for his grandkids, he took pride in everything he created. He was multi-talented, creating visual works of art in the mediums of gun-making, oil painting, and especially woodworking. His life's portfolio of hand-whittled carvings and other priceless works of art will be treasured by his family, and cement his lasting legacy as a skilled craftsman. He is survived by his daughters Donelle (Jeff) Fields and Stacey (Doug) Morrison, his grandchildren Ian, Megan (Brandon), Parker (Kate), Kirk (Jade), Reid, Jack, and his 4 great-grandchildren, Kyler, Asher, Wyatt, and Michael. He is preceded in death by his brother Bill Green, and his son, Stewart Kirk Green, who passed away from leukemia at the age of 8. Don missed Kirk immensely, and his family knows that they are re-united now and making up for lost time. A funeral is scheduled for 11am on April 22nd at Fitzgerald's Southwood Chapel, Tulsa with a graveside service at Rest Haven Cemetery in Oklahoma City at 3pm. In lieu of flowers, memorial donations can be sent to Oklahoma Medical Research Foundation. If you cry for Don, remember the words of this note that hung on the family fridge, "we know the heart would have no rainbow, if the eyes had no tears."

The family of Donald Ray Green created this Life Tributes page to make it easy to share your memories.

Send flowers to the Green family.