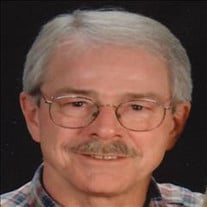 Donald Stephen Kraycik passed from this life peacefully at home on Saturday, May 29 at the age of 73. Don was born in Easton, PA to Edward and Helen Kraycik. After growing up in Phillipsburg, NJ and graduating from Phillipsburg High School, he enlisted in the US Army and was stationed at Pusan Air Base in South Korea. As a young man, he lived in PA where he met Peggy. He followed Peggy to Las Cruces, NM where she was attending New Mexico State University and developed a love for the desert southwest. They married December 23, 1979 in Las Cruces, NM. Don then enrolled at OSU Okmulgee where he earned 2 Associate degrees in Air Conditioning and Electronics. Following his graduation, he went to work as an instructor at OSU Okmulgee. He and Peggy moved to Tulsa in 1988 where he lived until his death. Don's life changed forever with the birth of his son, Stefan, in August, 1994. His career path allowed him to work for several employers, including Whirlpool, Honeywell, Toshiba and finally AT&T. He loved classic cars and sports cars and was thrilled to own several Miatas. He had many fun memories with the Miata Club. He also enjoyed woodworking and crafted beautiful Southwest clocks. Don had a mechanical aptitude and could fix anything. Don retired from AT&T in 2013 after working 13 years as a telecommunications technician. After retiring, he enjoyed his morning coffee while reading the paper and watching TV. He was a home body and usually had a Chihuahua or two snuggled up to him. He bought a 1973 TVR for a retirement project and replaced the engine. He enjoyed showing it at car shows in Tulsa. Don also loved bird watching. For a few years he planted a butterfly garden to attract and nurture endangered Monarch butterflies. He loved traveling to Florida and the desert southwest. Don was a talented photographer and always had a camera in his hand when he traveled. Don is survived by his wife, Edith (Peggy) and his son Stefan. He was immensely proud of his son. He is also survived by his brothers, Edward (Ed) and wife Shar, of Dacula, GA and James (Jim) and wife, Lori of Naples, FL as well as his sister, Veronica (Ronnie) and her husband Mike Cavanaugh of Frankford, DE. He had a special place in his heart for his nephews, Eddie and Daniel Kraycik. Special thanks to the compassionate staff at Miller Hospice. Following the service, guests are invited for refreshments in the Family Center at the funeral home.

Donald Stephen Kraycik passed from this life peacefully at home on Saturday, May 29 at the age of 73. Don was born in Easton, PA to Edward and Helen Kraycik. After growing up in Phillipsburg, NJ and graduating from Phillipsburg High School,... View Obituary & Service Information

The family of Donald Stephen Kraycik created this Life Tributes page to make it easy to share your memories.

Donald Stephen Kraycik passed from this life peacefully at home...

Send flowers to the Kraycik family.