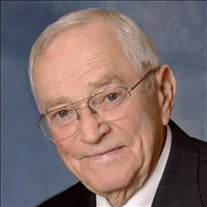 Donald Benedict Rush, Sr, died at home October 10, 2021, after his long battle with heart disease. Jacquelin Marie Rush, his loving wife of 64 years, slowed his fall and cradled his head as he sank to the floor. They were together to the end. He would not have had it any other way. He was preceded in death by his parents, five brothers, and four sisters. He is survived by his wife, Jackie; sister, Sister Mary Daria Rush; son Don Jr; son David and wife Trena; daughter Debbie Morgan and husband Ray; son Dan and wife Jenny; daughter Denise Dossing; twelve grandchildren: Rodney Rush (Niki); Talisha Rush (Nick Nicely); Justin Morgan; Devri Morgan (Holly); Sasha Rangel (Oscar); Paige Morgan; Zach Morgan (Cheyenne); Ryan Morgan; Tyler Morgan; Blake Morgan; Brad Chaussee; Brian Chaussee (Angie); and 19 great-grandchildren. Don was born at home in Tulsa on March 15, 1933, the tenth of eleven children of Emma and Thomas Rush. A 1952 graduate of Holy Family High School in Tulsa, he served in the US Navy from 1952 to 1956. He saw combat aboard the destroyer minesweeper USS Endicott in the Korean War. He and a Jackie met on a blind date in July, 1953, when he was home on leave. He surprised her with a second date when he picked her up from a Social Club meeting, with her hair up in curlers. He told her that he had five sisters, so curlers didn't scare him. They exchanged letters for the rest of his time in the Navy. They both saved every letter. He surprised her with a phone call through RCA radio from Guam, when it was her birthday in Stillwater and his birthday in Guam, on the other side of the date line. They married in 1957, raised five children in Jenks, and occasionally took in extra children for a while who had experienced unfortunate events. Many still think of him as their second father. A master do-it-yourself handyman, he taught his children the values of hard work and attention to detail. For an article honoring his decades of service as a draftsman for Sun Oil Company, when asked what he did in his free time, he replied, simply, "I raise my kids." His free time was entirely devoted to his family and volunteer work with scouting. Don and Jackie spent much time in retirement driving friends to medical appointments, always taking care of others. The core of his identity, however, was his love and adoration for Jackie. Through the terminal stages of his disease, he maintained his sense of humor, always trying to put those around him at ease. He showed us how to live, and when he knew he was dying, he showed us how to do that, too, with his head held high, a twinkle in his eye, a smile on his face, a goofy dad joke at the ready, unafraid, and without regret.

Donald Benedict Rush, Sr, died at home October 10, 2021, after his long battle with heart disease. Jacquelin Marie Rush, his loving wife of 64 years, slowed his fall and cradled his head as he sank to the floor. They were together to the end.... View Obituary & Service Information

The family of Donald B. Rush, Sr. created this Life Tributes page to make it easy to share your memories.

Send flowers to the Rush family.