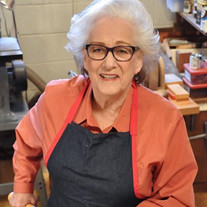 Donna Matles, 92, a respected artist, Jewelry designer, wood turner, and conservator of Judaica, died at her Tulsa home on Wednesday, March 24 following a long illness. Owner and proprietor of Donna Designs, the longtime Tulsa resident was born May 11, 1928 to Seeman and Sada Kaplan in Minneapolis, Minnesota, where her father was a well-known architect. Donna never stopped being a student. At the age of 84 she learned to use a cutting torch and was turning wood until the age of 90. In addition to her degrees from the University of Minnesota, Cornell University and the University of California, Berkeley, she studied at Penland and Arrowmont Craft Schools, two of the top such schools in the nation. She met her husband, Oklahoma native Sidney Matles, here in Tulsa at a children's party when she was only 14 years old. Shortly thereafter the two became pen pals. They later crossed paths again at the University of California (where Sidney dated Donna's roommate). Years later, while Donna was working in the art department of the Spiegel Catalogue in Chicago, she got a call from Sidney, who was in town on a buying trip for his family's women's store. The reconnection was all that was needed. Sid and Donna were married in 1953 and settled in Tulsa to start their family. But Donna's artistic talents were not to be lost. In 1960, after the birth of her two children, Steven and Gail, she began Donna Designs, creating commissioned jewelry and sculptural pieces, as well as providing conservator work for museums, synagogues and private collectors. Much of her work can be found in Tulsa's Jewish institutions, Temple Israel, The Synagogue/Congregation B'nai Emunah, Zarrow Pointe Retirement home and Health Center, and the Sherwin Miller Museum of Jewish Art, where Donna served on the Board of Trustees. She was a member of the American Guild of Judaic Art, and her work was featured in numerous publications, most recently in "500 Judaica", Innovative Contemporary Ritual Art. She was a long-time teacher at the Philbrook Museum of Art and mentored numerous artists in the region, as well as being a member of the Oklahoma Designer Craftsmen and the Society of North American Goldsmiths. Donna was predeceased by her husband, Sidney, in 2007, and is survived by her son, Steven (Marty) of Reno, NV; daughter, Gail Kirkland of Dallas, TX; and grandchildren, Bernie and Molly Matles; Ashley Hereid and Katie Kirkland. Due to the pandemic, a private graveside ceremony is to be held at the Old Temple Section of Rose Hill Cemetery. Click HERE for livestream of graveside service at 10:30 am on Monday, March 29th. In lieu of flowers, the family wishes memorials to be made to the Sherwin Miller Museum of Jewish Art, 2021 E. 22nd Place, Tulsa OK 74114-2800. Fitzgerald Ivy Chapel, 918-585-1151

The family of Donna Mae Matles created this Life Tributes page to make it easy to share your memories.