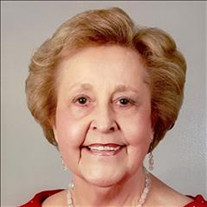 Dorothy "Dottie" Maggard was born on September 21st, 1934 in Canon City, Colorado to Gladys and William Henry Esser III. After her father passed away when she was 13 years old, her beloved grandfather, Peter Esser, helped raise and nurture her and her brothers, Bill, Don and Ron into the wonderful people they are today. On April 12th, 1958, Dorothy married the love of her life, Charles "Chuck" David Maggard. They lived in Tulsa, Oklahoma for the majority of their lives, where Dorothy spent her time as a warm and nurturing homemaker devoted to caring for her beloved husband and their 3 children, Judy, Scott and Kathleen. Her family was her whole world. Her children will tell you that her greatest gift to them was the example of her faith. She had a deep love for her God and her Catholic faith, a special devotion to the Blessed Mother, St. Jude, and of course, St. Anthony. She often worried that she might have worn out these beloved saints of hers, particularly St. Anthony, as she requested his assistance often. She spent many hours on her knees, whether it was saying a rosary or a novena to St. Jude for anyone that was in need. She taught us all what it meant to pray with faith. Once their children were grown, Dottie and Chuck loved spending time on their sailboat and traveling. Dottie was passionate about experiencing all things beautiful in this world. She pursued many hobbies as well but most of all, she loved to laugh, to dance, to talk, and to be in the presence of those she loved. Once retired, Chuck and Dottie spent each and every summer at their treasured ancestral cabin in the Bighorn Mountains of Buffalo, Wyoming. Time at the cabin was sacred, using the beautiful summer months to enjoy God's creation in the untouched mountains where Chuck grew up. This is also where Dottie loved to spend her time making new memories with her family. Dottie filled the cabin with laughter, joy, and so much love. Everywhere Dottie went, she made it home, including to those around her. As her children and family grew, Dottie's next greatest joy was becoming a grandmother, affectionately known as Grandma, Gram, Hotdog, or Mema and eventually, great-grandmother or "Gigi". Her jovial soul brought so much joy and playfulness to each of her beloved grandchildren and great grandchildren. Slumber parties at her house always included trips to Chuck E. Cheese Pizza, Braums Ice Cream, or the mall. Wherever she was, was where her grandchildren and great grandchildren wanted to be. She was always the life of the party in their eyes, but also, a safe place to land. She wanted to be there for every moment of your life, to experience your greatest joy or your worst heartache. Quick with a light-hearted song or story, smiles and laughter followed her around on every visit and joyous holiday. You could always find her with camera in hand (or in later years the iPhone) making sure to capture every sacred moment with her family. Dottie was selfless and kind, dedicating her life to her most valuable possession: her family. Chuck and Dottie made a simple promise to each other, that at the end of their days when they were called back to their Heavenly Homes, they would meet one another at the last star on the tail of the Big Dipper. We know that Chuck was waiting there for her last Wednesday. With broken hearts, we know we must say goodbye for now, but know her legacy will continue to live on throughout the lives of those who loved her until we meet again. The earthly world will not be the same without her in it, but we gladly rejoice that she has reunited with the love of her life at the bottom of the big dipper, watching over us with our Heavenly Father. Dorothy is survived by her brothers, William Esser and wife Phyllis, Donald Esser and wife Jean, Ronald Esser and wife Sandy; children, Judy Farrell and husband Don, Scott Maggard, Kathleen Hufnagel and husband, Dan.; grandchildren, Michael Farrell and wife Erin, Jennifer Schneider and husband, Donovan, Kristina Ojeda and husband, Alexi, Ryan Hufnagel, Katie Gust and husband George, Nicole Maggard, Malissa Henkelman and husband, Kevin; great grandchildren, Olivia and Wyatt Ojeda, Lily Hufnagel, Emmy Gust, Clayton Schneider, Avianna Maggard, Zephyr and Maevis Henkelman.

Dorothy "Dottie" Maggard was born on September 21st, 1934 in Canon City, Colorado to Gladys and William Henry Esser III. After her father passed away when she was 13 years old, her beloved grandfather, Peter Esser, helped raise and nurture... View Obituary & Service Information

The family of Dorothy Marie Maggard created this Life Tributes page to make it easy to share your memories.

Send flowers to the Maggard family.