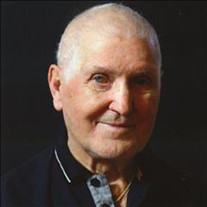 On Thursday, March 31, 2022, at 1:58pm our Dear Lord came with His open arms accompanied by His angels to welcome our dad, grandpa and husband to His eternal home just short of his 98th birthday and 70th wedding anniversary. Edmund or Ed as he as was known by many was born in Buffalo, New York on July 8, 1924 to parents John Orwat from Poland and Agnes Kasprzyk Orwat from Buffalo, New York. Edmund was nicknamed "Mundy or Mungu" by his close family growing up. He was the 5th of 8 sisters and brothers. Edmund grew up working hard in the fields picking beans to give all the income to his mother to support the household. Edmund's father was disabled when he lost his right arm in an accident when Edmund was young. He walked to elementary school then to a public all-boys high school. After graduation from high school, he worked for Curtiss-Wright for a short time until he was drafted into the Marines. He chose instead to enroll into the Army to serve in WW11 in the European Theater in Germany. Edmund was an Army veteran serving from May 1943 to June 1946. As a result of his military experience and born as the 'Greatest Generation' his profound patriotism was always evident and very important to him. After honorable discharge from the Army, Edmund attended the University of New York at Buffalo to become a civil engineer. He worked for nearly 40 years for the State of New York Department of Transportation supervising the building of roads and bridges in New York. Edmund was introduced to Irene Martha Zakowski by her brother Henry who was a friend of Edmund. Edmund and Irene married on June 28, 1952. They lived in the home Edmund built in Elma, New York for the next 55 years until they moved to Tulsa, Ok. in 2013 to be near his daughter. Edmund remained productive and active his entire life until close to his death. He was always wanting to do for others and remain 'useful'. He continued to drive even when he turned 97 years old. His goal was to be able to care for Irene and provide the best for her. Edmund enjoyed being with his family, taking mom jazz-band dancing and being a 'snow-bird' going to their Florida condo to escape the harsh Buffalo, New York winters. Dad gave of himself to see that his family was taken care of in all regards including to provide a firm, complete Catholic faith - based foundation for his family. Edmund is survived by his wife Irene, daughter Cheryl Ashley (Michael), sons Dexter (Paula) and Brian (Charlene); grandchildren Reanne, Megan, Mallory, Lexie, Moriah, Bianca, Adam and Andrew; great-grandchildren Connor, Cameron and Landon and sister Irene Cieslak. He is preceded in death by his parents and siblings John, Joseph, Frances, Helen, Angeline and Richard. Edmund fought a hard fight, and his desire was to live to be 100 years old. Well, he didn't accomplish that, but he wanted to die "with his boots on" and that he did! We love you dad, grandpa, pops, great-grandpa and husband - until we meet again on the Last Day in Heaven. Jesus, I trust in You. All are invited to a Rosary Service which will be held at 7:00 p.m. on Sunday, June 5, at Fitzgerald Southwood Colonial Chapel, with a Funeral Service at 11:00 a.m., Monday, June 6, 2022, at Saint Bernard of Clairvaux Catholic Church 4001 East 101st Street, Tulsa, OK. Please join us for lunch after the funeral.

On Thursday, March 31, 2022, at 1:58pm our Dear Lord came with His open arms accompanied by His angels to welcome our dad, grandpa and husband to His eternal home just short of his 98th birthday and 70th wedding anniversary. Edmund or Ed as... View Obituary & Service Information

The family of Edmund Adam Orwat created this Life Tributes page to make it easy to share your memories.

Send flowers to the Orwat family.