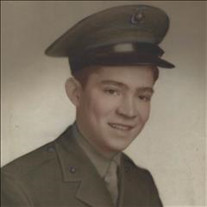 Edward Michael Morris departed this life on August 24th, 2021 at the age of 94. He was born in Manhattan, New York on August 5th, 1927 to James and Virginia Morris. He was one of 8 siblings. He was preceded in death by his parents, siblings, and wife, Nora. He is survived by his 6 children: Steve Morris and wife, Sherry, of Sand Springs; Kenneth Morris, Donald Morris, both of Tulsa; Robert Morris and wife, Ann, of Tulsa; Edward Morris, Jr. also of Tulsa; and Jeanine Rittenberg and husband, Mike, of Canyon Country, California. He had seven grandchildren: Kathryn, Adam, Kelly, Austin, Bailey, Chad, and Megan. Ed brought his family to Tulsa in 1961 as part of American Airlines' relocation effort. He worked for American Airlines as a Fleet Maintenance Scheduler for 38 years, from 1951 to 1989, before retiring to enjoy life with his precious wife, Nora, who passed in 2004. His strong devotion to his wife was exemplified as he visited her grave daily (rain or shine) for 17 years. His commitment of time and love to his children growing up included coaching their Little League baseball teams. He enjoyed watching sports with all his grown sons and was an avid San Francisco Giants fan. Ed also cheered for the University of Tulsa as his adopted hometown team. Ed will be remembered for his steadfast love of family, devout Catholic faith, and sense of duty and responsibility to do the right thing. As with many of his generation, he answered the call to serve during WWII in the Marine Corps and was a veteran for 75 years. He was training for the invasion of Japan before the atom bomb ended the war. There is a proverb that says: The glory of a young man is his strength. Gray hair is the splendor of the old. Inherent in that proverb is the span of a life. Edward Morris' well-lived life finished with a splendor that was marked by wisdom, honor, and valor. His guiding presence will be greatly missed by all who knew and loved him. Private family services. In lieu of flowers, donations can be made to Meals on Wheels or Catholic Charities.

Edward Michael Morris departed this life on August 24th, 2021 at the age of 94. He was born in Manhattan, New York on August 5th, 1927 to James and Virginia Morris. He was one of 8 siblings. He was preceded in death by his parents, siblings,... View Obituary & Service Information

The family of Edward M. Morris created this Life Tributes page to make it easy to share your memories.

Send flowers to the Morris family.