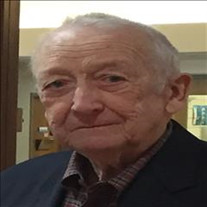 Edward Michael Tierney, age 94, passed away peacefully the early morning hours of July 7, 2021, in Tulsa, Oklahoma. "Ed" was born in Yonkers, New York on January 22, 1927, to Michael and Isabelle (Cooke) Tierney. He was raised in Mt. Vernon, New York and graduated from Mount St. Michael High School, Bronx, New York. He served in the U.S. Navy in World War II and was honorably discharged. In 1946, he began his lifelong career with Metropolitan Life Insurance Company. On November 17, 1951, he was united in marriage to Elizabeth Ann (Betty Ann) Gardiner in Bronx, New York. This union lasted until Betty Ann passed away in February 2015. In 1973, Ed transferred to Tulsa with Met Life at their newly established regional service center in the life underwriting department. He made many new friends here but always kept up with and travelled with his cherished friends and family "back East." Ed was an avid reader and volunteered at the American Red Cross Blood Bank for years. He and Betty Ann were founding members of St. Benedict's Catholic Church and attended faithfully for 41 years. Ed was the consummate gentleman in his approach to life, others, and even his dress! "Pop", as he was affectionately known after the birth of his first grandchild, will be sorely missed by his surviving family; son, Peter Tierney of Arlington, Texas, daughters Patricia Vogel and husband James of Bixby, Oklahoma, Susan Raymer and husband Kelly of Edmond, Oklahoma, and Laurie Allen and husband James of Edmond, Oklahoma; Grandchildren Courtney Tetzlaff (Michael), Melissa Vollbrecht (John), Christopher Vogel (Angela), Michael Allen, Kevin Tierney (Whitney), Patrick Raymer (Lacey), Andrew Allen (Nicole), and Steven Tierney. His great-grandchildren include Teddy, Kit, Olive, Libby, EJ, Brooklyn, Blake, and Keagan. Also surviving him are his brother Richard and wife Anne of White Plains, New York. Family members passing before him were his wife, parents and brother-in-law and sister-in-law, Thomas and Mary Gardiner and grandson, Michael Anthony Tierney. The family would sincerely like to thank the staffs at Covenant Living Bixby and most recently at Heritage Point Tulsa for their compassionate caring of "Pop." Funeral services will be Tuesday, July 13, 2021 at 10:00 am at St. Benedict's Catholic Church, Broken Arrow.

The family of Edward Michael Tierney created this Life Tributes page to make it easy to share your memories.

Send flowers to the Tierney family.