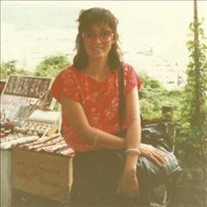 Eileen Wu Rickerby was born in Calcutta, India, on September 2, 1949. As a teenager, Eileen contracted Polio, which left her paralyzed for six months. During that time, her father encouraged her to fight against the disease, and eventually, she began to walk again. In 1966, her family moved to Hong Kong where Eileen started a job that allowed her to travel across all of Asia for work - including Hong Kong, Singapore and Beijing - before finally immigrating to the United States. She worked in Los Angeles and eventually settled in Chicago with a job as an event planner. This is where she met her husband, Brian. Eileen was instrumental in leading Brian to the Lord. Three days after Brian received the baptism of the Holy Spirit, God told him that Eileen would be his wife. Just three short months later, they were married in Hong Kong. Eileen and Brian celebrated 34 wonderful years of marriage. Eileen's biggest wish was to be a mother. Even after years of being told she would never be able to have kids, she continued to pray like Hannah from the Bible. "And she made a vow, saying remember me, and not forget your servant but give her a son, then I will give him to the Lord for all the days of his life" (1 Samuel 1:11 NIV) Her son, Michael Wu, was born September 2, 1992 - sharing her birth date. They shared 29 special birthdays together. Michael grew up to be a musician, and Eileen was his biggest fan. Every night before bed, she would check on him as he created music. While Michael was her only child, Eileen acted as a mother to many of Michael's friends, treating them like her own son or daughter. She welcomed them into her home with open arms and always made sure they were fed. Eileen was unwavering in her relationship with the Lord. She was so ready to be with Him in paradise. She spoke of running, dancing, and flying in her dreams. She is now living out those dreams in Heaven, with no pain in her body. Eileen's life touched many, and the impact she had on those around her will never be forgotten. Eileen Rickerby is survived by her husband, Brian Rickerby, of Tulsa, OK, her son, Michael Wu Rickerby of Tulsa, OK, her mother Wu Loo York Gwi of Toronto, and her sister Lillian Herms of Hong Kong. She was preceded in death by her father William and her sister Jelin Leong.

Eileen Wu Rickerby was born in Calcutta, India, on September 2, 1949. As a teenager, Eileen contracted Polio, which left her paralyzed for six months. During that time, her father encouraged her to fight against the disease, and eventually,... View Obituary & Service Information

The family of Eileen Wu Rickerby created this Life Tributes page to make it easy to share your memories.

Eileen Wu Rickerby was born in Calcutta, India, on September...

Send flowers to the Rickerby family.