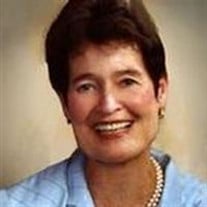 Brennan, Elizabeth Theresa “Liz”, 81, died on Tuesday, February 10, 2009 in Tulsa. Born April 11, 1927 in Philadelphia, Pa. to John and Anna Leonard, Liz was raised and educated in Philadelphia, graduating from Fitzgerald Mercy Hospital, where she worked as a Registered Nurse. She met Thomas Brennan on a blind date and they were married on December 26, 1953 in Philadelphia. They had six children. Tom and Liz raised their children in Philadelphia, Beloit and Tulsa, moving to Wisconsin in 1972 and to Tulsa in 1978. Liz was active in the Tulsa community. She was a docent at Philbrook Art Museum and a member of the Saint Charles Guild, Christ the King Church, Southern Hills Country Club, the Blue Sky Investment Club and the Golden Hurricane Club. A wonderful mother, grandmother, homemaker and friend, she will be missed by all. Liz enjoyed historical reading, world traveling, politics and sports. She took great pride in her family, enjoying nothing more than being with them for whatever occasion. She was preceded in death by her parents as well as her brother, John, and her sister, Margaret. She is survived by her husband, Tom, as well as her six children: Elizabeth Darabaris of Englewood, Colorado, Thomas Brennan of Wayzata, Minnesota, Terence Brennan of Tulsa, Oklahoma, Patrick Brennan of San Carlos, California, Mary Palmer of San Juan Capistrano, California, and Anne-Marie Carlisle of Singapore as well as ten grandchildren. Visitation is at Christ the King Catholic Church on Tuesday, February 17 at 5:30-7:00 p.m. followed by a Rosary at 7:00 p.m. A funeral Mass celebrating her life will be on Wednesday, February 18 at 10:00 a.m. at Christ the King Catholic Church. Following her Mass, Elizabeth will be buried at the Calvary Cemetery, Tulsa. Arrangements are under the direction of the Fitzgerald’s Southwood Colonial Funeral Home. 918-291-3500. www.southwoodcolonialchapel.com

The family of Elizabeth Theresa Brennan created this Life Tributes page to make it easy to share your memories.

Send flowers to the Brennan family.