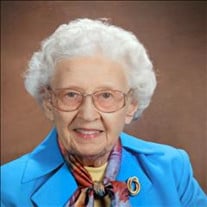 Elizabeth May (Betty May) Donnelly LeLeux entered into eternal rest on February 10, 2021. She was born on June 13, 1929 in Baltimore, Maryland, the second daughter of George Donnelly and Cecelia Wilson Donnelly. She attended the Institute of Notre Dame High School, a private Catholic all-girls school in Baltimore, and worked at Loyola Federal Savings and Loan after graduation. When her parents asked her to start paying rent now that she was working, she said, "Rent? I live here!" Betty May met Euclide Howard LeLeux at a dance, while he was stationed at Edgewood Arsenal in Maryland during the Korean War. The night they met, when she learned his first name, she jokingly referred to him as "�clair" for the rest of the evening. However, she gave him her phone number, and they were married at Blessed Sacrament Catholic Church on February 14, 1953. Howard and Betty May moved to Maplewood, LA where he continued to work for Cities Service at the Lake Charles Refinery and she became a skilled homemaker despite repeated encounters with lizards coming up through the bathtub drain. Her sisters-in-law, raised on a farm, soon learned not to ask the city girl to go out and kill a chicken for dinner. Howard and Betty May moved often as his career at Cities Service began to take off, living in Louisiana, New Jersey, Tulsa, OK, Brussels, Belgium, and New Jersey again before settling in Tulsa in 1972. Betty May made friends wherever she went and kept up correspondence by letter when she moved away. She joined the American Women's Club in Brussels and traveled around Europe and to the Soviet Union with them. She studied French in Brussels but was never able to become fluent and struggled at company dinners, once painstakingly asking a senior executive about a recent vacation only to learn that he had just spent the last 10 minutes describing it. Betty May turned her considerable energies to motherhood when their only child, Angeline Marie, was born in Tulsa in 1973. Howard was often away on business and she was active as a volunteer with the Church of St. Mary and at Angeline's schools. Her sister, Margaret Mary, moved to Tulsa from Baltimore in the 80s and Bet and Margie made a formidable team whenever a church, school, or Girl Scout event needed to be organized or staffed. As time went on, Howard retired, Angeline went away to college, and Betty May walked out of the kitchen one day and said, "I quit." Howard subsequently became an excellent cook. Betty May loved poetry, music, art, books on history and the British royal family, crossword puzzles and word games, cats, dogs, chatting with friends, birdwatching, organizing and cleaning, and a nice hot cup of tea with a cookie or two. Although she did not have grandchildren, she was very proud of her grand-cat, Alice. She was a master of the art of letter writing and was still writing to friends two months before her death. Betty May had a delightful sense of humor and persisted through the loss of her husband and 11 months of pandemic isolation with patience, determination, and a strong Catholic faith. Her wit and generosity will be fondly remembered by her family and many friends. Elizabeth was preceded in death by her sister, Margaret Mary Donnelly, and her husband of nearly 67 years, E. Howard LeLeux. She is survived by her daughter and son-in-law, Angeline LeLeux-Bajzek and William Bajzek, who wish to extend their deepest thanks and appreciation to the nurses and staff at Franciscan Villa and Cura Hospice. Funeral services will be private and held at FItzgerald Southwood Colonial Chapel. In lieu of flowers, donations may be made to Catholic Charities of Eastern Oklahoma.

Elizabeth May (Betty May) Donnelly LeLeux entered into eternal rest on February 10, 2021. She was born on June 13, 1929 in Baltimore, Maryland, the second daughter of George Donnelly and Cecelia Wilson Donnelly. She attended the Institute of... View Obituary & Service Information

The family of Elizabeth May LeLeux created this Life Tributes page to make it easy to share your memories.

Elizabeth May (Betty May) Donnelly LeLeux entered into eternal...

Send flowers to the LeLeux family.