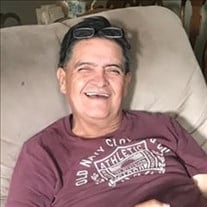 Eugenio Becerra Solis, a cord maker and resident of Broken Arrow, Oklahoma died unexpectedly on November, 29,2021 at the age of 62. Eugenio is survived by his wife Becky Solis, his son Carlos Solis and daughter in law Charis Solis; daughter Angelica Solis and son-in-law, Juan Lopez, his mother Margarita Solis Leon; grandchildren, Draeuh, Juliana, Asher, and Jude; his sisters Antonia Solis, Irene Solis, Maria Victoria Solis ; his brothers Nemesio Solis, Juan Carlos Solis; and many nephews and nieces. He is preceeded in death by his father, Eugenio Solis and brother Jose de Jesus Solis Becerra. Eugenio was born in Guanajuato Mexico on March 20, 1959 to Eugenio Solis and Margarita Becerra Leon. At the age of 22, he moved to the United States and found his permanent home in Broken Arrow, Oklahoma. Shortly after, he met the woman he would spend the rest of his 40 years with-Becky Solis, married November 20, 1981. During this time he dedicated himself to his life long trade of cord making at American Foundry in which he celebrated 40 years of employment on the day of his passing. On March 3, 1982 and May 4, 1986 respectively, he welcomed his son and daughter, Carlos and Angelica, whom he adored. Eugenio was a devoted husband, father and abuelo. A fan of the Dallas Cowboys, Oklahoma Sooners, and America Soccer Club, more often than not you could find him in the living room cheering for his teams. Many weekends were spent dancing and singing karaoke in the kitchen. He enjoyed being outside, taking care of his chickens and birds, camping out and boating with his friends and family. During baseball season, he made sure to attend every Broncos game his son played. Throughout his time, many people were blessed with his kind heart, his loving nature, and his friendly aura. He left his footprints in the lives of everyone he met- always welcoming anyone and everyone into his life-no judgment, no questions asked, always with open arms.

Eugenio Becerra Solis, a cord maker and resident of Broken Arrow, Oklahoma died unexpectedly on November, 29,2021 at the age of 62. Eugenio is survived by his wife Becky Solis, his son Carlos Solis and daughter in law Charis Solis; daughter... View Obituary & Service Information

The family of Eugenio "Jim" Solis created this Life Tributes page to make it easy to share your memories.

Send flowers to the Solis family.