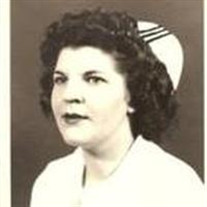 Evelyn Mae Williamson nursed thousands of Oklahomans through injury and illness. On May 28, 2010, she succumbed to her own infirmities. Evelyn was born September 2, 1926 in Jennings, Oklahoma. She was the youngest of four daughters’ born to Fred Lauener and Hester Portwood. Evelyn graduated from Tulsa's first nursing school at age 21 and had a long, accomplished career as a registered nurse and nurse educator. Evelyn was the first assistant director of nursing at Saint Francis Hospital and was director of nursing at Oklahoma Osteopathic Hospital (now OSU Medical Center). She led a school for licensed practice nurses and also taught at the University of Tulsa's School of Nursing. During her long career, Evelyn worked in all of Tulsa's major hospitals and was a private duty nurse. Working in Tulsa's Polio Building - a treatment center set up in a building just west of Hillcrest Hospital during a 1952 outbreak - was one of Evelyn's proudest accomplishments. The building was designed for acutely ill children, but adults were admitted also due to the city's lack of available bed space. The work was both physically and emotionally difficult, bat also highly rewarding. After her experience in Tulsa's Polio Building, Evelyn was asked by the federal government to travel to Corpus Christi to assist with a polio outbreak there. Service to others is something Evelyn instilled in her two sons, Stephen, the chief executive officer of EMSA; and Mark, a retired Captain of the Tulsa County Sherriff's Office. Other survivors include daughter-in-law, Teresa; grandchildren Jennifer Thomas, Ashley Schneeberg, Stephen Williamson, Andy Williamson, Jody Rogers and Angie Rogers; great-grandchildren Ava, Kate, Asa and Will; and one sister, Blanch Wilson. She was preceded in death by her parents, two sisters and her daughter-in-law, Pat Williamson. A private memorial service will be held on June 4. To honor Evelyn's spirit of caring, the family requests donations be made to Ronald McDonald House Charities, 6102 S. Hudson Avenue, Tulsa OK, 74.136, in lieu of flowers.

Evelyn Mae Williamson nursed thousands of Oklahomans through injury and illness. On May 28, 2010, she succumbed to her own infirmities. Evelyn was born September 2, 1926 in Jennings, Oklahoma. She was the youngest of four daughters&#8217; born... View Obituary & Service Information

The family of Evelyn M. Williamson created this Life Tributes page to make it easy to share your memories.

Send flowers to the Williamson family.