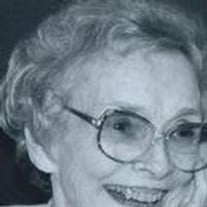 Frances Lucille Biedermann, 85, passed away on March 30, 2009 at Inverness Village in Tulsa, Oklahoma. Born on August 22, 1923 in Cedar Rapids, Iowa, she was the youngest child of Harry Francis and Mary Margaret (Noone) Robinson. Her family moved to California in 1937 and she graduated from UCLA in 1945 with a BA in Education. In 1947 she moved to Chicago where she worked as a copywriter for the Carson Pirie Scott company. Fran met the love of her life, Richard Charles Biedermann, on a blind date on Thanksgiving Day in 1947. She and Dick married on January 29, 1949. They lived in the Chicago suburbs and raised three daughters. Fran loved to arrange dinner parties, was an active member of various Catholic churches over the years, was an active member of A.A.U.W., and worked with students with literacy, English as a second language, and citizenship. Fran and Dick retired in Springfield, Missouri, and spent over 14 years traveling the country with their Airstream trailer and also visited Alaska and Europe. In 2003 Fran and Dick moved closer to their daughter in Tulsa and Fran eventually lived at Inverness Village. On January 29, 2009 they celebrated their 60th wedding anniversary with family and friends. Fran was preceded in death by her parents and only sister. She is survived by her husband, Dick, and daughters Nancy MacLachlan (husband Jim) of Spring Lake, Michigan, Carol Armstrong (husband Mic) of Sparta, Wisconsin and Lynn Schmuhl of Tulsa, Oklahoma, as well as seven grandchildren and three great-granddaughters. Visitation will be held on Tuesday, March 31, 2009 from 6pm to 8 pm, with prayer service and program beginning at 7pm at Southwood Colonial Chapel, 3612 E. 91st St, Tulsa, OK. Service will be held on Wednesday, April 1, 2009 at 11am St. Bernard’s Catholic Church, followed by interment at Calvary Cemetery. In lieu of flowers, donations can be made to the Alzheimer’s Association of Oklahoma, 6465 S. Yale, Suite 312, Tulsa, OK 74136, Catholic Charities, 739 N. Denver, Tulsa, OK 74148 or St. Bernard’s Catholic Church, 4001 E 101st, Tulsa, OK 74137.

Frances Lucille Biedermann, 85, passed away on March 30, 2009 at Inverness Village in Tulsa, Oklahoma. Born on August 22, 1923 in Cedar Rapids, Iowa, she was the youngest child of Harry Francis and Mary Margaret (Noone) Robinson. Her family... View Obituary & Service Information

The family of Frances Lucille Biedermann created this Life Tributes page to make it easy to share your memories.

Send flowers to the Biedermann family.