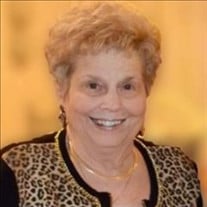 Frances Bohan Green Schultz was born to Frank and Emily Bohan on November 8, 1933. She was surrounded by her family when she went home to the Lord on October 12. Frances graduated from Holy Family High School and then went on to attend Tulsa... View Obituary & Service Information

The family of Frances Ann Schultz created this Life Tributes page to make it easy to share your memories.

Send flowers to the Schultz family.