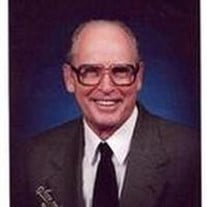 FLUSCHE’ - Frank August, Sr., 82 years old, Tulsa, OK, passed on August 20, 2009. Frank was born in Muskogee, OK, August 23, 1926, to Edward Nicholas and Mary ( Bartholet ) Flusche'. He grew up in rural Muskogee surrounded by his 2 brothers, sister and numerous cousins. He graduated from St. Joseph Prep School. At 17, he joined the United States Navy and served in the Pacific Front in WWII. After his service, Frank attended and graduated from Oklahoma A and M, where he met and married his wife, Louise Gray. They returned to the family dairy farm for several years before relocating to Tulsa, where Frank chose a career in real estate. In the early 1960’s, Frank formed Carriage Company Realtors which he operated for many years. More recently he was associated with McGraw Davisson Stewart, specializing in commercial real estate. Some of Frank's many business achievements include numerous positions on the Oklahoma Real Estate Commission, the Tulsa Real Estate Board, the national Association of Realtors, RELO. He served as president of the Tulsa Real Estate Board in 1971. On a national level, he served as regional vice president for the National Association of Real Estate Brokers. He received the CRB designation from the National Association. Frank was professional in every sense of the word, and a true salesman at heart. He strongly believed in continuing education, both as the educator and the student. He was influential in launching the careers of many other professionals. Frank's other interests included fishing, sports, Junior Achievement, family and church activities. He was a 52 year member of the Church of St. Mary, where he served on the Finance Board, School Board and Men's Club. Frank was preceded in death by: his parents; his two brothers, Charles and William; and an infant daughter, Denise Ellen. He is survived by: his wife, Louise (his "Weezie") and his 7 children, Mary Tula (Terry), Lisa, Anita, Rita, Edward, Teresa and Frank, Jr. (Allison). Also survived by his 8 grandchildren, Bridgett, Michael, Nicholas, Emily, Will, Mary Ellen, Ann Marie, Jessica; and his sister, Clara Boyles and her family. Rosary 6 p.m., Sunday, August 23, at Fitzgerald Southwood Colonial Chapel. Funeral Mass at Church of St. Mary 10:30 a.m., Monday, August 24. Frank was a man of integrity, faith and determination. We are thankful that God gave us the opportunity to share in his life. "The credit belongs to the man who is actually in the arena” Fitzgerald Southwood Colonial Chapel, 918-291-3500. www.southwoodcolonialchapel.com

The family of Frank August Flusche' Sr. created this Life Tributes page to make it easy to share your memories.

Send flowers to the Flusche' family.