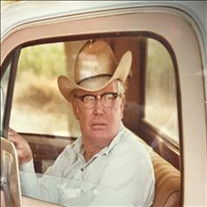 Franklin Duane Carter died on Monday, July 6, 2020, at Hillcrest Hospital in Claremore, Oklahoma. He was 94 years old and would have been 95 in August. A visitation will be held from 6:00-8:00 p.m. Thursday, July 9 and funeral service 12:00 p.m. Friday, July 10 both at Fitzgerald Southwood Colonial Chapel located at 3612 E. 91st Street South, Tulsa, Oklahoma. A graveside service is scheduled at Fort Gibson National Cemetery, 2 p.m. Friday, July 10. Duane was born in 1925 to Mike and Cora Carter, on their farm near Hollis, Oklahoma. He had two younger brothers, Ralph Darrel and Don who have preceded him in death. Duane grew up in the Dodson, Texas area on a cotton farm and also helped his Dad operate a livestock auction. He graduated from Dodson High School in 1943 and was then drafted into the U.S. Army. However, he did not have to report until the family's crops had been gathered in November of 1944. During WWII, he served in the Pacific theater in and around Okinawa. Following his tour in the Army, Duane started farming again with his father and later met Dorris Pauline Carter. They were married on June 27, 1952, in Oilton, Texas, and made their home in both Oklahoma and Texas spending 68 happy years together as man and wife. During this time he worked both as a farmer in West Texas and as a rancher in Oklahoma. In 1997, he and Dorris moved to Tulsa to be closer to their children and grandchildren and made Tulsa their retirement home. He is survived by his wife Dorris, his two sons Billy and James, his two daughters Shirley and Margie, 12 grandchildren and 14 great grandchildren.

Franklin Duane Carter died on Monday, July 6, 2020, at Hillcrest Hospital in Claremore, Oklahoma. He was 94 years old and would have been 95 in August. A visitation will be held from 6:00-8:00 p.m. Thursday, July 9 and funeral service 12:00... View Obituary & Service Information

The family of Duane Carter created this Life Tributes page to make it easy to share your memories.

Send flowers to the Carter family.