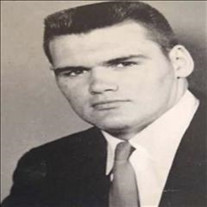 Frank Morgan Hagedorn, 83, passed away at his home in Tulsa surrounded by his family members on July 10, 2021. He was born February 11, 1938 to Martha and Delmar Hagedorn in Morgantown, West Virginia. He came to Tulsa in 1956 to play football for the University of Tulsa. After graduating in 1962, Frank made Tulsa his home and began working as a school teacher, coach and police officer. Frank later attended the University of Tulsa School of Law and graduated with a law degree in 1968. After completing law school, Frank served as an Assistant District Attorney and left when he was appointed as the Director of the Oklahoma State Bureau of Investigation. He remained an active member of the bar for over 53 years. Frank will be remembered for his love of country music, golf, and watching classic television. He loved playing his guitar and performing with his friends, and will be lovingly remembered singing to his children and grandchildren. He was compassionate about helping all who knew him and would always go the extra mile for those who needed him. He is preceded in death by his father, mother and his brothers Cecil Hagedorn, Samuel Hagedorn, Marshall Hagedorn and sisters Jacqueline Hagedorn and Amanda Butt. He is survived by his sister Maxine Mattern of Morgantown, West Virginia. He is survived by his wife Debra Hagedorn, daughter Michelle and son-in-law Brian Williams, daughter Brooke Gerber and son-in-law Beau Gerber and son Brent Hagedorn and daughter-inlaw Glory Hagedorn. He is also survived by his grandchildren including Isaak Rayburn, Ethan Johnis, Piper Williams, Noah Hagedorn, Gia Gerber, Ari Gerber and Arthur Hagedorn. He will be greatly missed by his wife, children, grandchildren and his many extended family members including nieces and nephews and his many friends. A memorial service will be held 11 a.m. Monday, August 2 at First United Methodist Church.

Frank Morgan Hagedorn, 83, passed away at his home in Tulsa surrounded by his family members on July 10, 2021. He was born February 11, 1938 to Martha and Delmar Hagedorn in Morgantown, West Virginia. He came to Tulsa in 1956 to play football... View Obituary & Service Information

The family of Frank Morgan Hagedorn created this Life Tributes page to make it easy to share your memories.

Frank Morgan Hagedorn, 83, passed away at his home in Tulsa surrounded...

Send flowers to the Hagedorn family.